“We wish to advise that the operation to install the new footbridge across Wood Street was aborted on Wednesday 21st December due to technical issues with the alignment of the Macalloy suspension bars that connect the bridge deck structure to the pylon.

We are in the process of rectifying these issues and have agreed a new road closure with the City of London for the bridge installation, week commencing 6th February with a back up closure the following week.

The install of the stainless steel pylon on the 19th December was a success and this is ready to receive the bridge.”

“Macalloy” is the name of the manufacturer of the steel bars. They are based in Sheffield.

The bridge was successfully installed on the 6th February.

I drew the picture sitting on my suitcase near the vehicle entrance to the St Giles area. A man came to open the nearby garage, which was crammed with builder’s equipment and paint pots. Later, a succession of well dressed middle-aged people came by, as though leaving a large event. They were all of a type, and spoke distantly with each other.

Afterwards, I walked underneath the bridge and looked at the junction between the bridge and the sloping walkway, on the right of the picture. This joint is interesting because the walkway slopes down, so, to join it perfectly, the bridge cannot be horizontal at this point. It looks as though the bridge twists slightly to accommodate this geometry, but it’s difficult to see at the moment. I have drawn the bridge as slightly rainbow-shaped, as that’s what it looked like, but the architect’s pictures in the newsletters show it as flat: 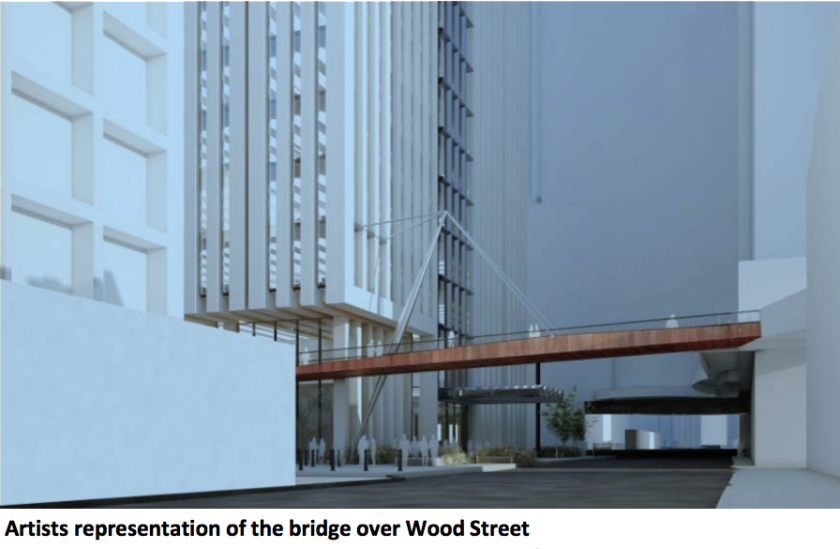 One thought on “The new Bridge across Wood Street”

Yes! my pictures are for sale. Yes! I do commissions. Please ask. You can contact me by leaving a comment on any page of this website, or by email – see the contacts page.