The building which was Bernard Morgan House has now been pulled down. This is sad. It had a calm 1960s look, and ceramic tiles on the side.

I looked across the gap and could see the Welsh Church: Eglwys Jewin. 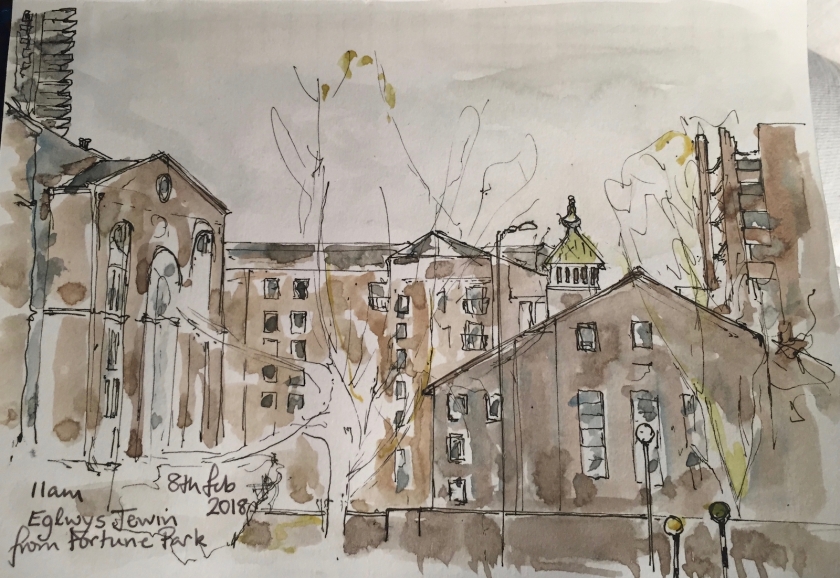 The church is the building with the green roofed turret and the long windows. It was founded around 1774. According to its website “capeljewin.org” in the 19th century it was “one of the most powerful and influential churches in the Calvanist Methodist tradition”.  It was very well attended in the 19th century so they built a new and bigger chapel on Fann St in 1879. This was destroyed in the Blitz in 1940. The building I’ve drawn was built in 1960.

Lauderdale Tower is just visible, to the left of the picture, and Blake Tower is on the right. Ahead, behind the church, is Tudor Rose Court, a City of London building providing sheltered housing to people over 60: 16 leased, and 60 social rented flats.

Bernard Morgan House used to be a City of London building too. It was a police house.

The destruction of Bernard Morgan House was opposed by a well-orchestrated campaign of local residents. But the residents did not prevail.

Taylor Wimpey are going to build luxury flats: “The Denizen”. This is how the view I’ve drawn will look after “The Denizen” is built:

Here’s another view of “The Denizen” from the Taylor Wimpey website. See how big it is! Fortune Park is the trees in the foreground. You can see Blake Tower on the right and Lauderdale Tower in the Centre.

*Bernard Morgan
Update, March 2018: John Tomlinson tells me that Bernard Morgan House was named for a councilman. Buildings and streets in the City of London are only named after people who died at least 20 years previously, and Bernard Morgan the codebreaker was evidently fit and healthy in 2014.

One thought on “Eglwys Jewin from Fortune Park”