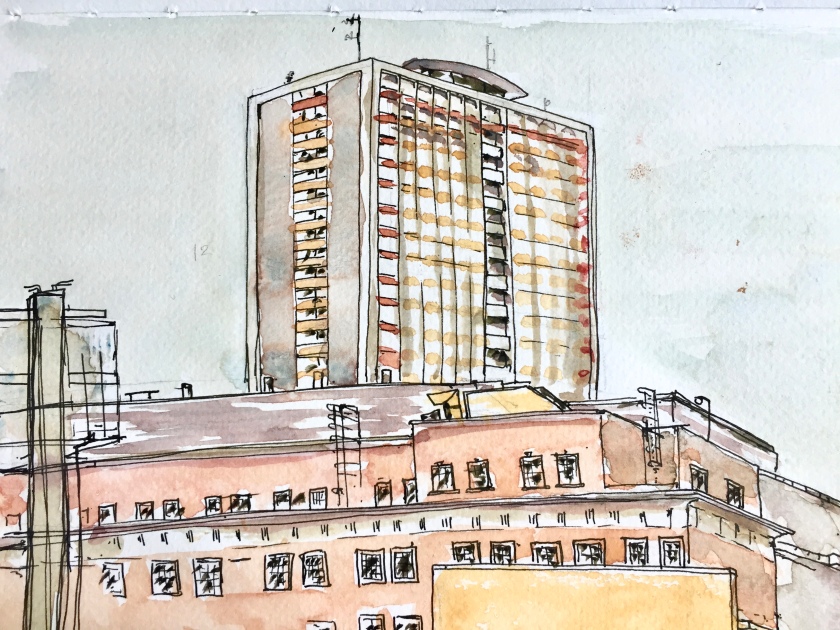 Peregrine House was finished in 1969. It is part of the City Road Estate, together with Kestrel Tower. I have drawn Kestrel Tower previously, see this link: Towers of Finsbury – Rahere and Kestrel. See the different brick colours on Peregrine Tower: the more yellow brick for most of the balconies, and the more red-coloured brick for the balconies across the top and around the sides.

The solid neo-Georgian block in front of Peregrine House is “Level 3 communications” a data centre and communications hub. In 2011 they applied to Islington Council for permission to install 5 steel flues. The permission was granted and the flues are on the back (north) of the building, not shown in the sketch. As part of the consideration of the permission, the building is described as “1930s”. I haven’t yet found out what it was before it was a data centre. It looks like a telephone exchange or electricity substation. (Update: 6 February 2019 – it was a Gordon’s Gin Factory – see comments below)  I drew the back of this building in the Kestrel Tower sketch: Towers of Finsbury – Rahere and Kestrel

Level 3 also applied for permission to install 4 satellite dishes on the south side of the building. The application is undated, and no indication is given of the outcome. This application was “retrospective”. Link to their application is here:  Level 3 Application for Satellite Dishes

I was looking at the South face of the Level 3 building and I couldn’t see any satellite dishes.

In the foreground, right, of my sketch, is the blank end-wall of 6 Moreland Street, an Arhag Housing Association residential building, which looks like a late 1970s development.

In the foreground on the left, work is in progress on “Kings Square Phase 2” which a hoarding informed me was “93 new homes”, which are “51 council homes and 42 for private ownership”. Completion is due in 2020, and they’ve already got the concrete frame up. The construction workers were working hard and calling to each other while I sketched, issuing instructions and shouting warnings in several languages, including English. The contract was awarded to Higgins Construction plc in February 2017: £30 million.

The sketch took 90 minutes: half an hour each for pencil, pen and watercolour. Done in Jackson Watercolour sketch book, 8 by 10 inches.

I saw the satellite dishes on the Level 3 building, they are high up on the roof and not visible from ground level.

3 thoughts on “Peregrine House from the King’s Square Estate”