Here is a house in Firhill Place, Aberdeen, near the University.

I sketched it from a coffee shop called “Grub”, on Orchard Street.

Aberdeen Town House was built in 1868-74 by John Dick Peddie and Charles George Hood Kinnear. It incorporates the remaining part of the Tolbooth of 1615-29 by Thomas Watson of Old Rayne at the east, and includes the City Chambers to Broad Street, added in 1975 by the Aberdeen City Architect’s Department, with Ian Ferguson and Tom Campbell Watson as its chief architects.

The building on the left of my sketch is the brutalist structure “City Chambers” covered in a tessellation of rectangles of grey marble. Its foundation stone was laid on 17th November 1975, according to the inscription on the foundation stone.

I was on my way to the ferry terminal. 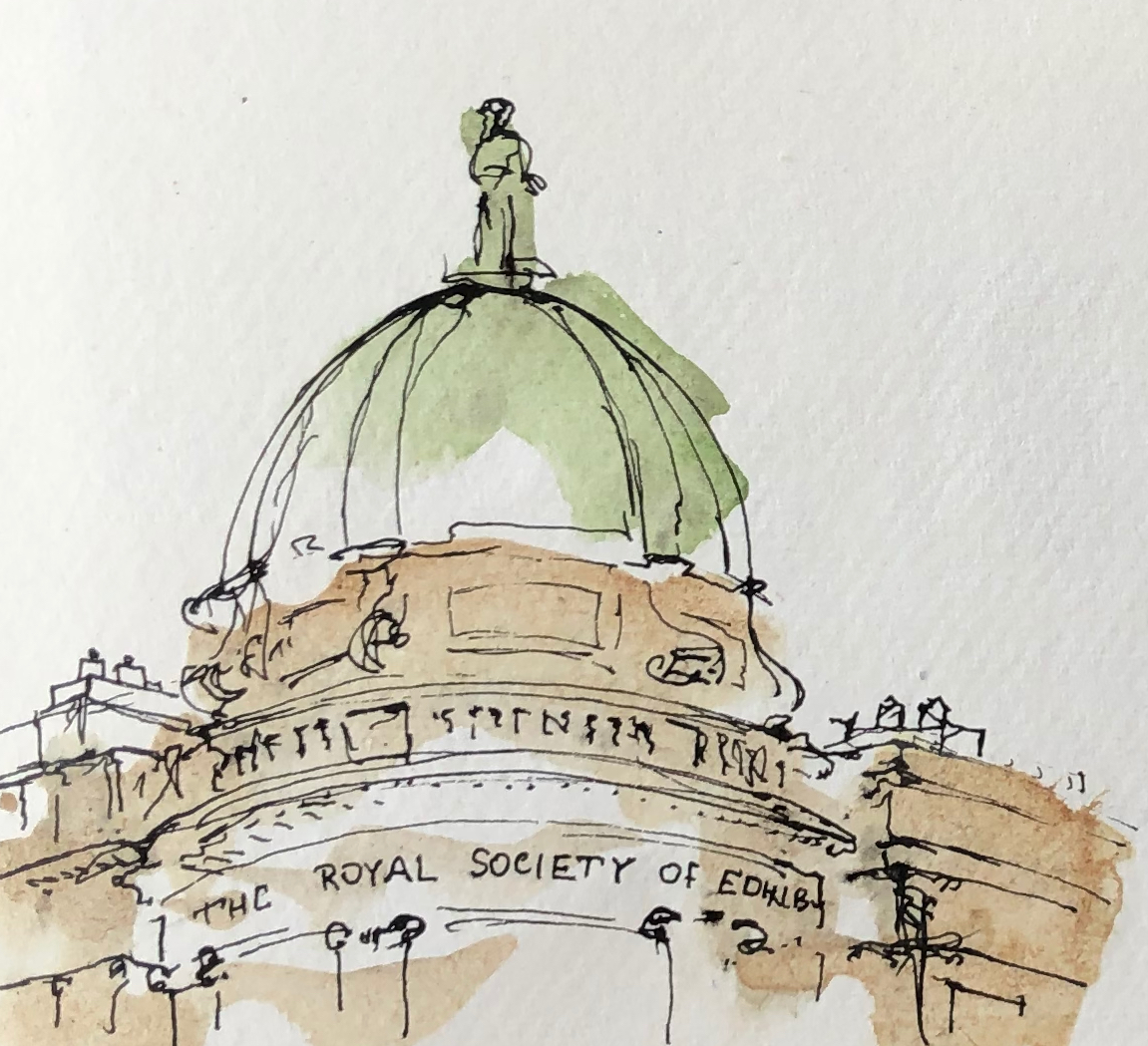 We travelled to Orkney by train via Edinburgh and Aberdeen.

I carried a long thin sketchbook and made drawings along the way.

Here is my very long sketchbook, 12″ x 5″ made by Khadi Paper, and bought at Atlantis in Hackney, London.

Here is another experiment with printed backgrounds. My first experiment was this drawing at Monument.

Monument EC3, on a hot day

I thought the background was a bit bright, so I chose more muted colours for the next attempt.

Here are the cardboard cutouts I used for making the relief prints. I used a small square sketchbook made by “PrintUrchin” and pre-printed the pages using relief printing ink, diluted with extender and water so it wasn’t too bright (learning from last time). It still came out quite bright. Those printing inks are heavily pigmented.

I printed the pages first, then took the sketchbook with me on my journey, and made sketches on top of the prints.

Here are some of the sketches. They are done on the train, hence the rather shaky lines. It’s amazing how the printing, done in advance, seems to fit the subject.

Here is the octagonal building at Pocra Quay, drawn while on a walk round Aberdeen waiting for the ferry.

This octagonal building was a Navigation Control Centre, operating up until 1966. It was built in around 1797-8, according to the leaflet from the Aberdeen Heritage trail. I sketched it from the shelter of the doorway to the “Silver Herring” restaurant, on a cold, windy and rainy day.

This is a really fun technique. I shall use it again. 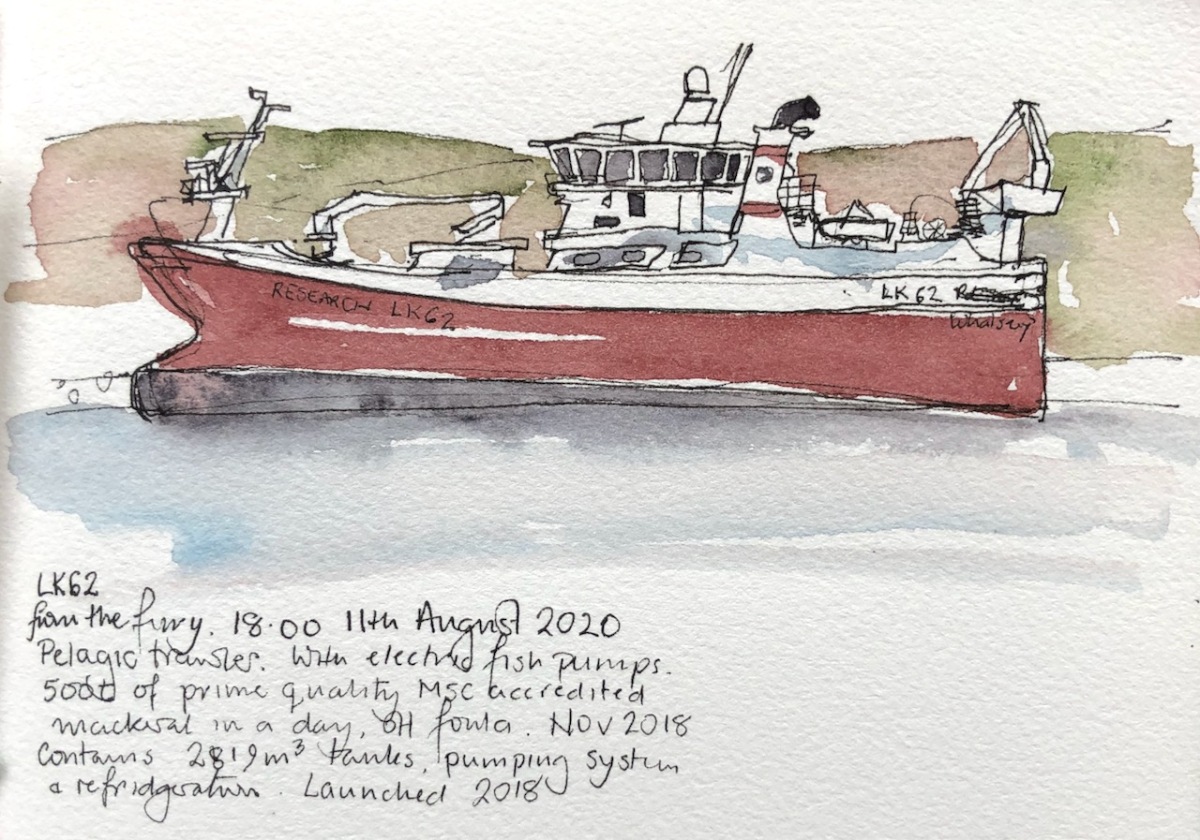 On the ferry from Lerwick to Aberdeen I had an “outside” cabin with a window. From there, I had a view of LK62, named “Research”.

Despite the name, this is not a research vessel, but a trawler. It was launched in November 2018, according to a very informative article in Fishing News.

Aboard a quite different vessel, the Northlink Ferry, I arrived in Aberdeen the next morning. Aberdeen was in lockdown, and I planned to spend as little time there as possible, just two hours, before my train left for the South. My idea was to sit in the sun outside the ferry terminal, eating my packed breakfast, before a gentle stroll to the railway station. Ha! I arrived in Aberdeen in the middle of a rainstorm. Roads had become rivers. On the periphery of my vision, a drain cover had lifted, and the water rose from it in a translucent pillar. I struggled towards the station through floods and wind.

Aberdeen station was a huge glass tent, with the rain battering, and lightning visible, dimly, through the roof covering. It also resembled all the tents I have ever known in that the floor was covered in a thin layer of water. I sat down damply on a damp metal bench. All the trains were cancelled. Fortunately, I had some banana cake. I drew a picture. Then I found a helpful official and a bus.

The bus was going to Edinburgh. I drew a picture on the bus. After having been in Shetland for three weeks, I noticed that there were huge trees, everywhere. The sun came out.

The Caledonian Sleeper took me North. It’s the most marvellous way to travel – and fulfils the requirement to be socially isolated. I had one of the new cabins, or “rooms” as they call them. It even had a built-in toilet and shower. So I woke up refreshed, approaching Edinburgh.

Because of COVID-related timetable alterations, the train didn’t go all the way to Aberdeen, as it normally should. I changed at Edinburgh onto a normal train.

Aberdeen was eerily empty. I drew a picture near the Art Gallery.

Then eventually I found somewhere open in Belmont St. I sat outside. The waitress cleaned every table and every chair after customers left. She even sprayed the laminated menu with disinfectant before replacing it on the pile. On a paper form at counter I filled in my contact information for contact tracing. Next to the form was the biro to use. I used it without thinking. I guess everyone had used it. I did remember to wash my hands afterwards though.

While waiting for my food I drew the establishments on the other side of the street, visible through the awning.

Both were bars. One was a converted church and was called “Redemption”. The other was a house, called “Revolution”.

The restaurant I was in was called “Books and Beans”. I could see no books, and beans didn’t seem to feature on the menu. I had an excellent huge sandwich.

Maybe we need a campaign for meaningful restaurant names.

I went through Aberdeen on the way out to Shetland, and on the way back.

On the way out I drew St Machar’s Cathedral then proceeded south to find the excellent coffee shop Kilau Coffee recommended by the church guardian, who knew her coffee shops. By then I was in the University. It was still raining. So I sketched Kings College Chapel, from a convenient cloister.

Then I walked back to the ferry terminal, still in the rain. Here’s a sketch of a building on the main square.

I was taken by the multiple levels of bartizan, which are the towers fastened to the side of the building. These are also called courbelled tourelles. I was sketching from the doorway of a charity shop, in biro, which was the only medium that worked in the sluicing dampness. I tried to find out what this magnificent building was. It seemed only to have a number: “26 Castle Street A-H”, so I guess it is residential.

From the window of my cabin on the ferry I saw the same building from a distance. 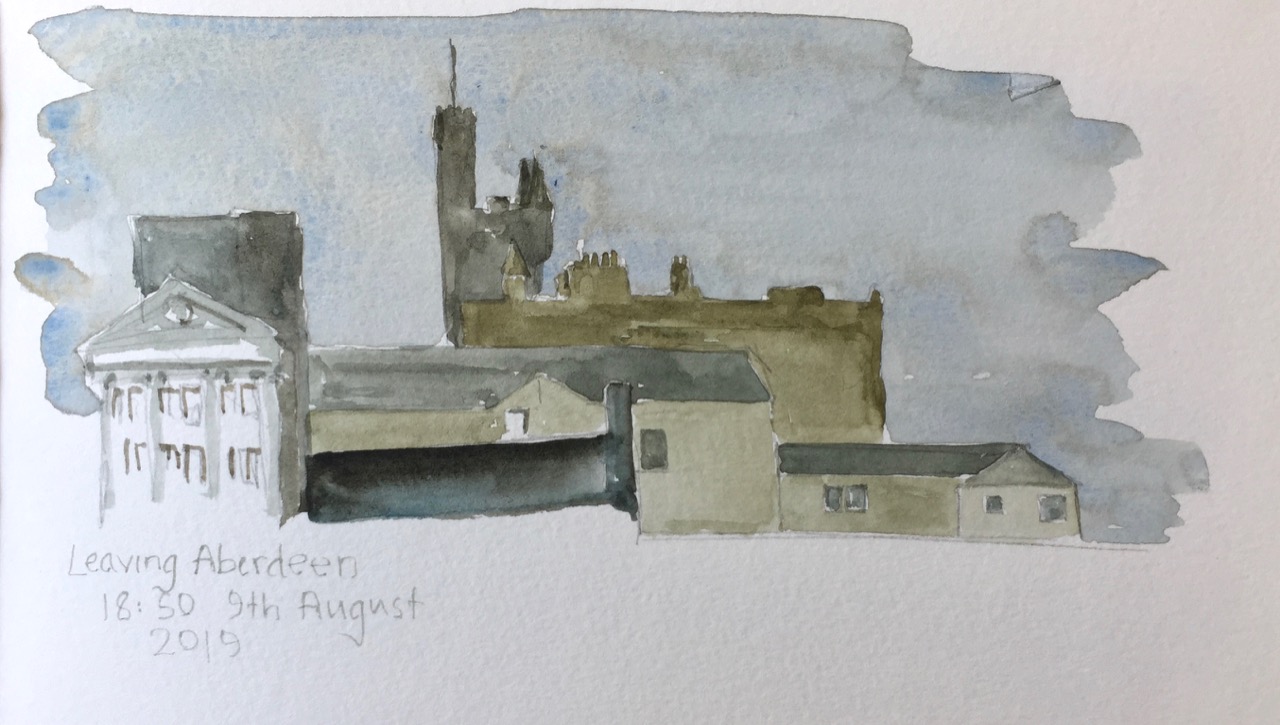 On the way back, two weeks later, I took a walk round what I termed the “Starbucks side of town”. This is the part south of the railway station. There is indeed a Starbucks, on Union Street. The houses are grand here, and in orderly terraces. Here’s a glimpse of an end house, a quick sketch as I was on my way to the bus station.

The Starbucks side of town.

More posts about these visits to Aberdeen: 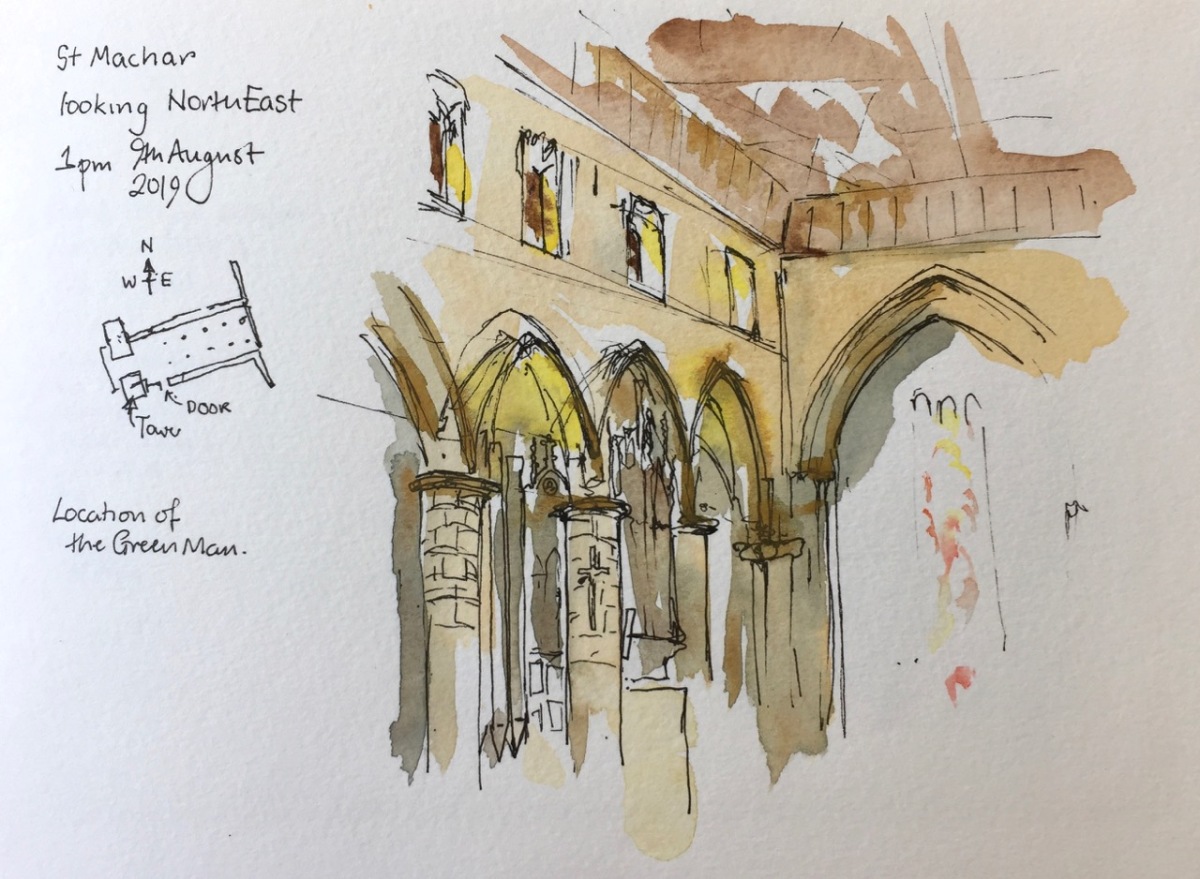 St Machar’s is in Old Aberdeen, North of the University.

I went to look for a medieval carving, a “Green Man”. According to my instructions it was in the “North East Crossing” on the “west side”. I had a good look around. This is a very plain church, solid granite columns, no carving. I could see no “North East Crossing”. The church is rectangular, not cross-shaped like most churches. The enthusiastic guardians welcomed me, and told me about the church. It is very ancient, and many different peoples have worshipped there, including the Celts, whose 7th century stone cross stands at the west end.

I felt a shiver as though someone was telling me a ghost story. My instructions came from a printed book, much later than the Reformation, clearly. But the guardian was still talking. “You can see the ruins,” she was telling me, “Outside”.

Outside it was raining, a heavy wet Aberdeen rain. I stomped about in wet grass, between gravestones. I was looking up, which made me more wet. And there he was, the Green Man, staring down. I risked taking my iPhone out of my pocket for an instant, to get a photo. 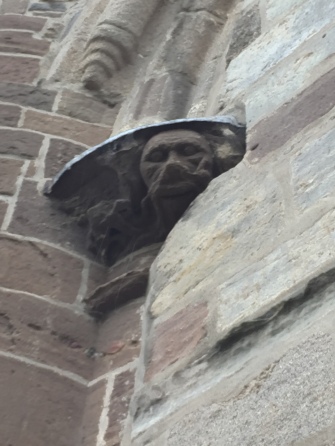 I couldn’t draw outside, so I went back inside. The picture I drew shows the position of the Green Man, but the inside wall. He is on the outside.

The ferry from Shetland arrives in to Aberdeen at 7am. The air feels cool and chemical, like water from a cold tap. I carry my luggage on my back, and it’s heavy.

It is Sunday.  Aberdeen is closed. The Union Square shopping centre is closed. So the route to the station is three sides of a rectangle, a circumnavigation of the Union Square, Jury’s Hotel and the Bus Station. Outside the Jury’s Hotel, a cluster of men with beer cans  part to let me through. My grim determination is reflected in their faces. Or perhaps it’s something else I’m seeing: their effort to stay vertical.

I spot the “Left Luggage” symbol at the Train station. The door has a dim window which frames a seated man. “I see the Left Luggage operative,” says my optimistic brain. The straps of my luggage are now making permanent furrows in the muscles of my shoulders. The door is locked. I rattle it. “It opens at nine,” comes a voice. It’s the seated man, who is behind me, reflected in the dirty glass. He is sitting on the sunlit steps, waiting.

From the table at “Patisserie Valerie” I can see that he is still there. He hasn’t moved at all. Those steps must be cold, granite. He must be fed up. But he didn’t seem fed up when I spoke to him. Perhaps he is sitting there for some other reason. Perhaps he does not require the services of the Aberdeen Station Left Luggage.

I do, though. I order breakfast at Patisserie Valerie. The glass and steel of the modern shopping centre cuts the view into bits. I can’t draw it all, so I draw a segment.

That odd curl in the top right is the “e” of “Union Square” written on the outside in modern 3D lettering.

When I went there, the seated man had gone.