Here is Michael Cliffe House, in the Finsbury Estate, from Tysoe Street.

The lower level block in the low centre of the picture is Joseph Trotter Close, also part of the Finsbury Estate.

While I was drawing the picture a man came and told me that he had seen the original architect’s drawing of this low level block. In the architect’s vision it was “sleek and wonderful”. But the man said the reality was very different. The concrete had worn badly and the building had not succeeded, in his opinion.

Earlier a woman came when I was at the pen-and-ink stage. She said that her 11 year old grandson had started painting, which pleased her very much. She bought paints for him. I asked if she painted too. She said no, but she was inspired by her grandson and might now have a go herself. “After all,” she said, ” he just paints anything, and I could do that too!”. I agreed.

The drawing took two hours. After I finished I went to have a look at Joseph Trotter Close. I saw a low-level set of bungalows, all very much inhabited, with children’s play things and outdoor chairs on the lawn. It may not be sleek, but it looked as though people enjoyed living there.

The entrance to Michael Cliffe House was cramped and congested, with cars manoeuvring awkwardly and a dark, obscured, entrance. Lovely typeface though.

The real surprise was inside the entrance. There, uncelebrated in the underpass, were some amazing mosaics of dancers. 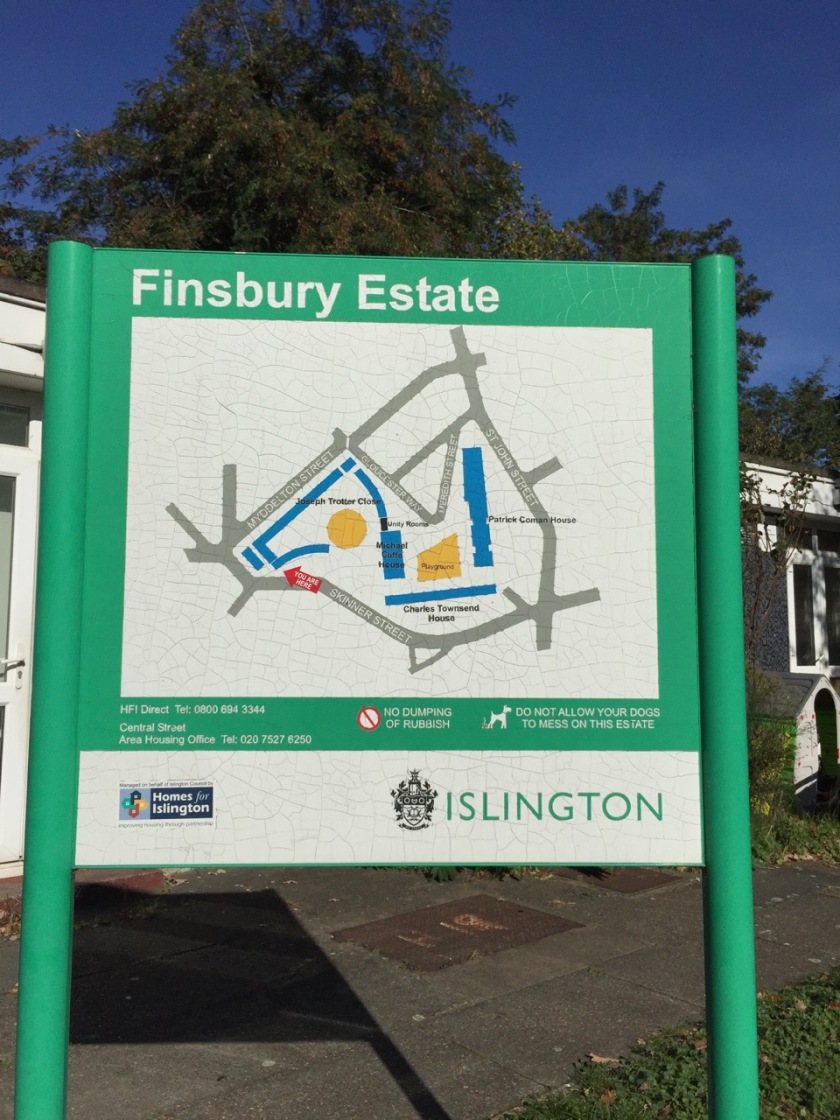 Later note (7th Feb 2019): There is detailed information on the Finsbury Estate on “British History online” – try this link, which starts with a history of Spa Green, and goes on to describe the Finsbury Estate.
https://www.british-history.ac.uk/survey-london/vol47/pp84-108

City Towers #cityoflondon from Seething Lane Garden EC3.
All Hallows by the Tower.
From the site of the former St Mary Aldermanbury, I looked across towards the North Wing of the Guildhall, the offices of the City of London.
At the junction of Love Lane and Aldermanbury in the City of London, there is a small park. If you are in the area, it’s well worth a visit.
From Stanley Cohen House, Golden Lane Estate. #cityoflondon
#clocktower @callyclocktower in Caledonian Park.