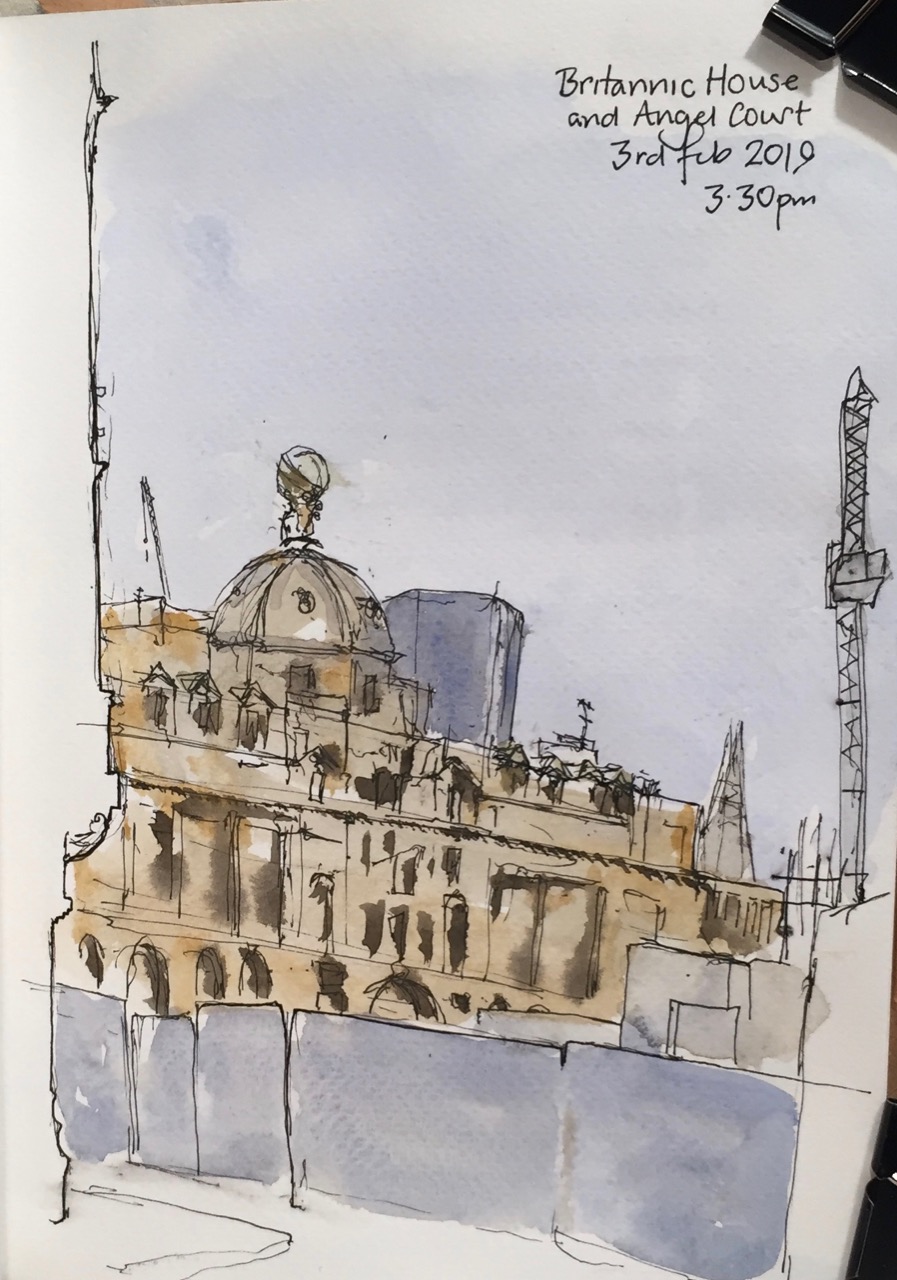 Here is a view of Britannic House, 1 Finsbury Circus, from the back entrance of Moorgate Station. 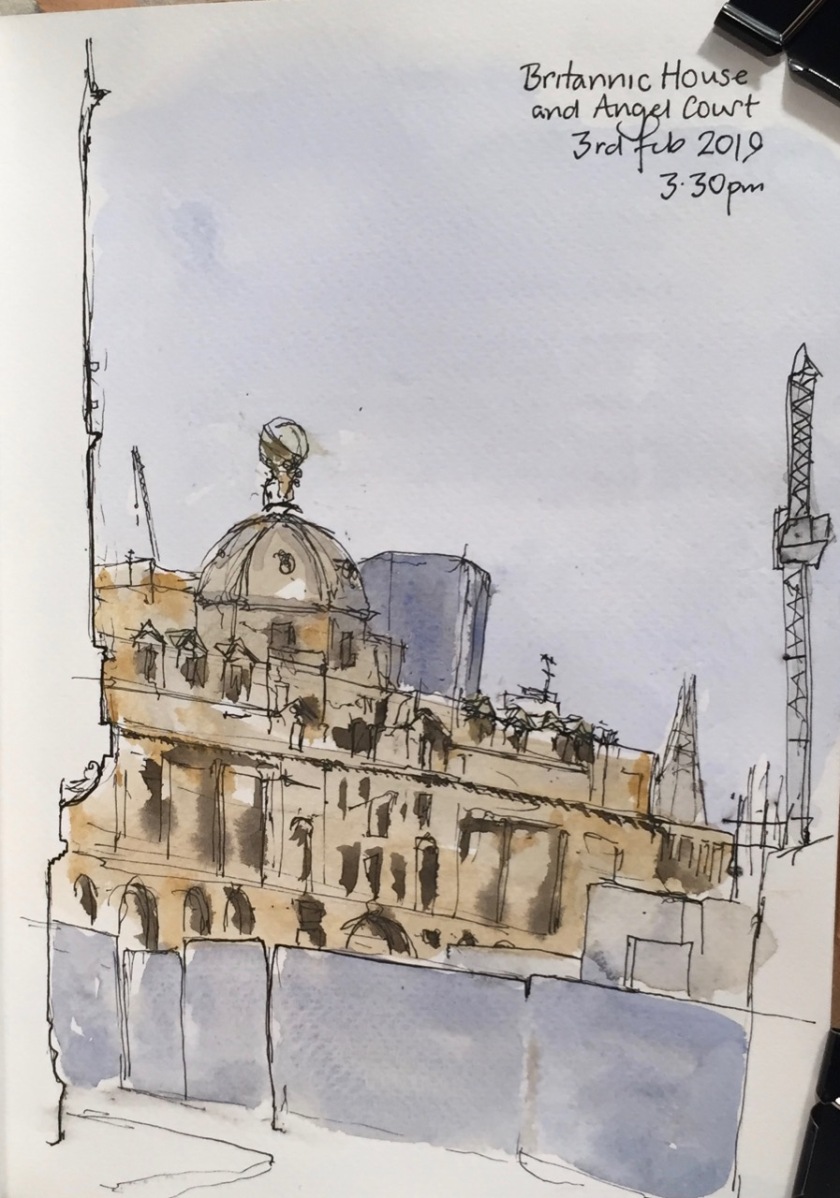 It was 5 degrees C. I was standing outside 45 Moorfields, at the junction with New Union Street.

Behind the blue hoardings is the Crossrail site. When the buildings above Crossrail are finished, this view will have gone.

As I was drawing, young people emerged at intervals from Moorgate Station, pointing their mobile phones like laser guns. They glanced up from the screen, and chose New Union Street. This is a poor choice. New Union Street doesn’t go anywhere you want to go. It joins Moor Lane about half way along Willoughby House in the Barbican. Then you have to turn either left or right. Either way is a long draughty walk.

Nobody asks for directions these days. Eventually a young woman hesitated. My curiosity overcame me. I asked if she needed directions. “No”, she said, “I’m just going to “Bad Egg”. It’s that way, isn’t it?” She pointed down New Union Street, no doubt following the advice of her phone. “Well, no,” I said, “You’re best off going this other way, and across the Piazza”. She looked doubtful, and glanced again at her phone as if asking it for permission. But she followed my instructions. She will get there ahead of the people in front who are walking three sides of a square. The phone doesn’t know about the Piazza in front of City Point, which is where “Bad Egg” is located. “Bad Egg” is a very noisy restaurant. I walk past it on the way to Moorgate.

I carried on drawing. More young people emerged and set off down New Union Street. I let them go. Then a woman emerged and walked in the other direction, pointing her phone at the Moorgate Crossrail site. She kept walking until she was right close to the hoardings, and then stopped. She looked accusingly at the hoardings. They should not be there. She should be able to walk south unimpeded. But there is a huge Crossrail site in the way. Evidently this feature was not apparent on the online map. She rotated gently, but still the reality on her phone refused to match the reality on the ground. She made an impatient gesture and walked out of sight, towards Moorgate.

After I finished the drawing I wondered what the tower was that is behind Britannic House. So I walked in that direction, and found it is “Angel Court Bank”, a multi-use office space.

It soars up, planted in a very ancient part of the city, near the Bank of England. Angel Court itself is an alley way which joins Copthall Avenue with Lothbury.

I liked the disjunction between the smooth modern architecture and the decorated banking halls on the other side of the alley. The black thing on the pavement is a hunk of black granite intended as a bench. It has slots cut in the side to stop skateboarders using it as a jump. 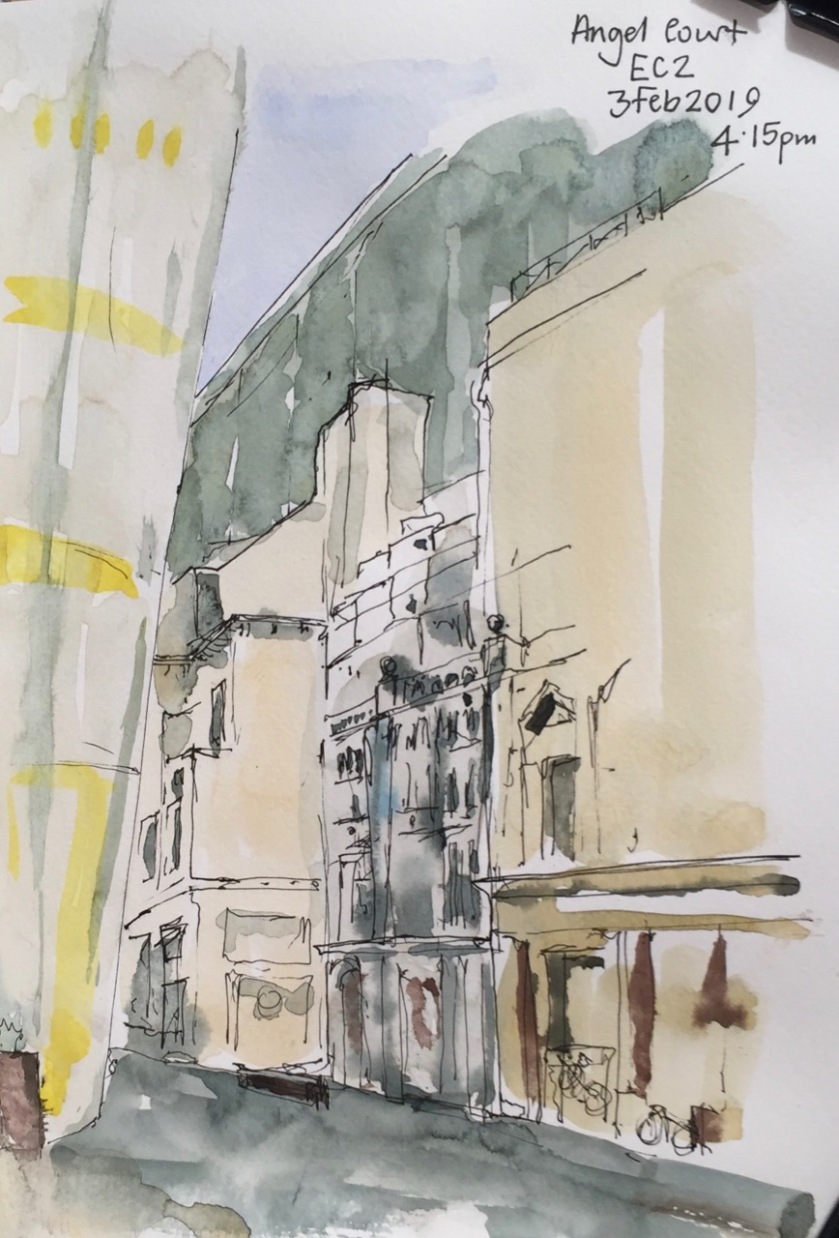 In this picture you see the modern tower “angel court bank” on the left. It is also called “One Angel Court”. It slopes outwards, as you see, and is totally smooth, made of curved glass, which must have been really hard to assemble. On the other side of the street are old banking halls, once grand. Number 11 is the one which is ornate, in the centre of the picture. It is dilapidated, apparently empty. Its pillars really are green and white marble, albeit that one of them is held together with a rusty iron band. On the right of the picture is Numbers 9-10. I was surprised to see the bikes locked to its iron railings, as this practice is generally frowned on, and bikes are cut down. This building also looks empty, but a notice in the window declared that it was inhabited by “live-in guardians”. A note on the letter box instructed the Royal Mail where to put the post for residents. The bikes, evidently, belonged to the live-in guardians. They have great place to live, for the time being.

I was really cold by this time and my eyes were streaming. So I came home.

I have down Britannic House before:

1 Finsbury Circus, across the Crossrail site 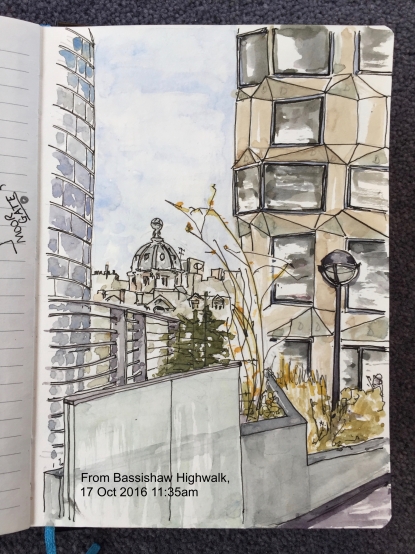 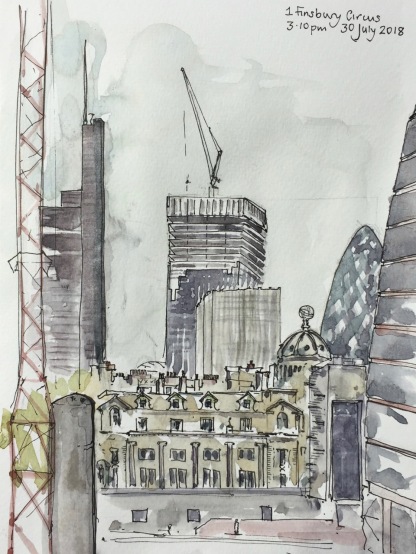 Here’s a bit, from the “Open House” site, on Angel Court: