The wooden sign from the main road said “Historic Site”, and pointed up a small road that lead steeply uphill. I was on my morning run and felt energetic, so I set off up there, keen to see the Historic Site. In Shetland, Historic Sites are often at the top of hills.

I turned around. In the distance was the island of Foula, which lurks on the horizon, looking menacing. Usually it’s seen across the sea. But from that second summit, Foula hovered above the green hills, too large,  too grey, too abrupt in its cliffs. As I started running back downhill, Foula sank reluctantly, until it disappeared below the horizon and all around was again soft green hills, and sheep.

The next day I resolved to find the Historic Site. I went on a mega-walk. Here is my route:

You see marked the “Germattwatt Café” where I stopped on the way.

I found the Historic Site which, against all expectations and precedent, was not at the top of any hill, but low down. near the sea, on a promontory, and near a fishing lake. There were low ancient walls, and the distinctive patterns of undulations that indicate a dwelling, property divisions, field boundaries.

In tribute to the wisdom of the ancestors who chose this place I stopped a while. There was a good view up and down the estuary. Good fishing was to be had, both freshwater in the lake, and salt water in the sea. Such fishing was still being had. In the sea was the fish farm and the mussel farm. I drew a picture: 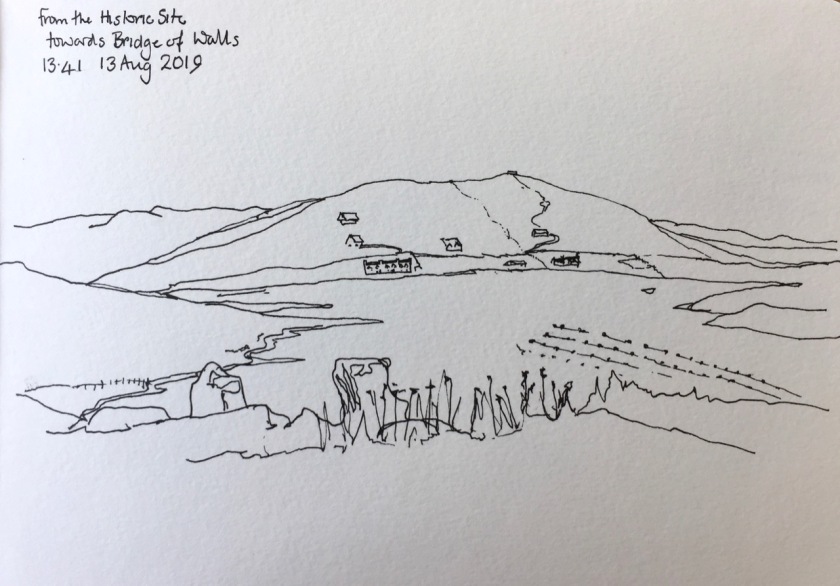 You see the stones of the Historic Site in the foreground. In the distance the “A971” makes its way East at the foot of the hill. The lines in the sea are the mussel farm. The high hill is  the Ward of Browland. Here’s the Ordnance Survey Map. The arrow shows the direction I was looking when drawing the picture.

Then I walked on, following the sea. Here’s a drawing near the “pier” circled in red on the map.

The whole walk was 22km, and took 8 hours, including two hours of stops for drawing, refreshment and looking at the view.