From Fenchurch St Station there is a stunning architectural view. I sketched it, standing outside the station. This was not a great place to stand. I put the colour on later, sitting down in the wooden seats nearby. A woman with a bike came by and told me someone had let down both her tyres. Why would they do that, she asked me. Why indeed. She went off, pushing her bike on its flat tyres. Her dog followed on its lead, disgruntled,  catching the mood of its mistress, deprived of a ride in the special dog-basket on the back of the bike.

Shown in the picture on the left is “Minster Court” a pinkish coloured Neo-gothic building built in 1991. It contains, amongst other things, the “London Underwriting Centre” and “Proud Cabaret City”, and a branch of “Balls Brothers”, a pub.

The glass building is “Plantation Place” built 2004, by Arup Group. Accenture is in there.

Behind I hope you recognise the “Walkie Talkie” skyscraper. In front and centre is the Clothworkers Guild. The little building at the bottom is St Olave’s Church Hall. St Olave’s Church itself is a lovely tower, which I would have seen if I’d moved slightly to the left. It’s behind the ponderous dark building on the right. I’ll go back and sketch it another time. This is the church where Samuel Pepys worshipped.

I walked towards the river and sketched in St Katharine’s Dock.

This is the view looking West, from the East side of the dock.

In the background on the left is “Guoman Hotels The Tower”, which is right next to the Tower of London. This hotel was built in 1973, one of the first buildings of the dockland re-furbishment. The Shard is in the background, centre.

The main building in the picture, former warehouses, is now called “The Ivory Building”. It appears to be residential. There were lots of bells to push, but I didn’t. I envy the person who has that turret. The clock was showing the correct time.

On the lower left is a restaurant with a sun umbrella. Its name was so tangled up in the fancy script of its logo that I couldn’t read it, something like “docole”.

Off the picture to the right a large rectangular stone was embedded at eye height. People rushed past, to the cafés and restaurants. The writing on the stone said:

St Katharine’s Day is 25th November, in case you were wondering. Also spelt with a C.

Here is my favourite picture of the walk, done on the way back.

This is an astonishing construction, left over from an earlier epoch, and now surrounded by new-build and glass and steel office buildings. It is a corridor of shops, like the famous passages in Paris. But actually, not like them. Since it was Sunday, the Arcade was not trading. It was looking rather dilapidated. As I sketched, I saw tourists make their way in there uncertainly, in a characteristic pose of staring at the mobile phone and glancing about. Evidently Google was telling them that Liverpool Street Station could be accessed was down there. It cannot, not on a Sunday. As they entered the Arcade, they looked about. Then they really looked about, rather than comparing the world to the mobile phone map.  They suddenly saw the broken glass, dusty shop fronts and cardboard, and the feet and legs of someone lying on the ground. They abruptly turned around and came out again into the sunlight, staring accusingly at the phone.

The script which says “The Arcade” is beautiful.

I particularly like the curved foot of the R, as though the letter is about to dance.

Here is work in progress, and a map: 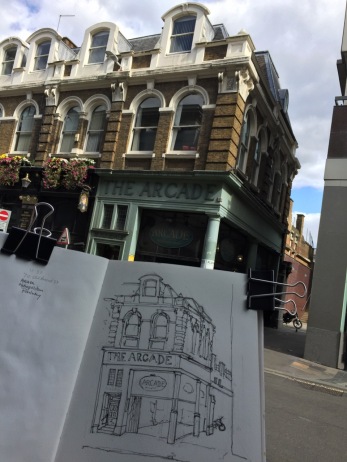 “The Arcade” work in progress

Homelessness is a problem in London, even right in the centre of the financial district.

One thought on “Sunday stroll in the City”