I went out to look for more gas lights in the City. There was rain, and the back alleys were wet. I couldn’t find any more gaslights.

At the South East extreme of my peregrination I looked up and saw St Peter upon Cornhill. It is wedged in between other buildings. 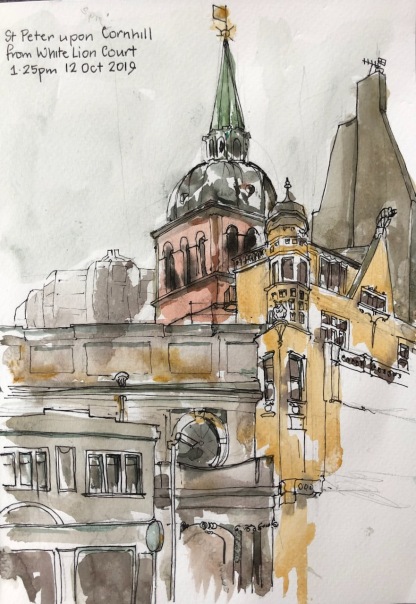 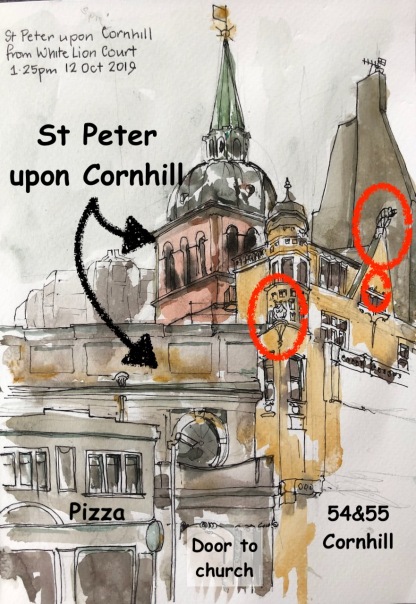 The church in among other buildings. The devils are circled in red.

The adjacent building is labelled “54 & 55” Cornhill, in lovely art-deco writing. There is a branch of “EAT” on the ground floor. High up, there are three strange devils (ringed in red on the annotated picture above). The two larger and higher ones are definitely female devils, with big breasts and strong muscles. The smaller devil is yelling from his position above a window. 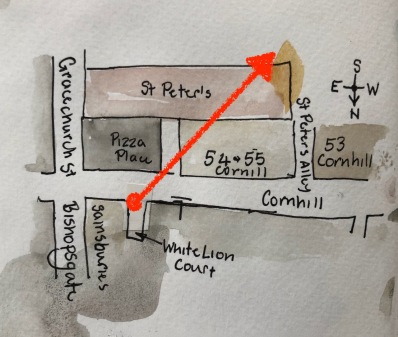 Map showing the buildings as seen in the drawing. Arrow shows the line of sight.

map with North at the top. Arrow shows the line of sight of the drawing.

I drew this picture from the shelter of White Lion Court, which is on the North side of Cornhill. This is one of those City of London back-alleys. It doesn’t go anywhere, just to the door of what looks like an insurance company, and off to the side is a doorway with ecclesiastical carving above. It looks like the entrance to a monastery. But that can’t be right. The modern iron gate is adorned with modern litter.

Litter on the gate of White Lion Court

As I was drawing a man came round from the nearby branch of Sainsbury’s to eat his sandwich and smoke.

Then later another man came by and asked me if I had seen the fire brigade. I said no, because I hadn’t. He said the fire alarm in one of the offices had gone off. He said he’d be wandering about for a bit, while he contacted the key holder. I could hear him calmly making phone calls. He was still there when I finished my drawing and packed up. I waved goodbye to him, and he nodded and half waved back, constrained in his movements as he was holding his phone to his ear and consulting a notebook.

It is astonishing how many tourist groups go down Cornhill. If I have done nothing else today, I have at least inspired a few tourists and other passers-by to look upwards to the onion spire of St Peter upon Cornhill. People pause, see that I am drawing, wonder what I can possibly be drawing in that dingy back-alley, and then look in the direction I’m looking and see the spire.

The tourist groups pause in the shelter of nearby Sun Court. I guess they are being told anecdotes about why there are she-devils on 54 and 55 Cornhill. I looked online. I can only find anecdotes, no facts. The building is by Runtz, 1853.

There has been a church at St Peter upon Cornhill since the 2nd Century AD, according to a tablet whose inscription was recorded and copied on various printed media, and now on Wikipedia. The tablet doesn’t exist any more as it was destroyed in the fire of London. The current building is by Christopher Wren, and was constructed between 1677 and 1684. There is also an entrance on Gracechurch St, which I must go and have a look at. 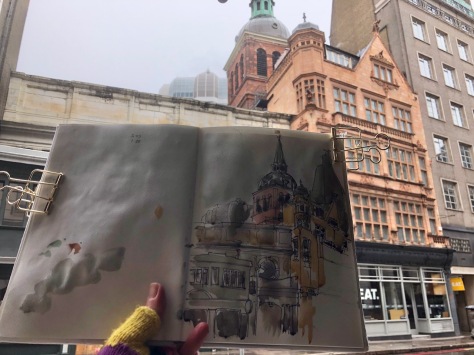 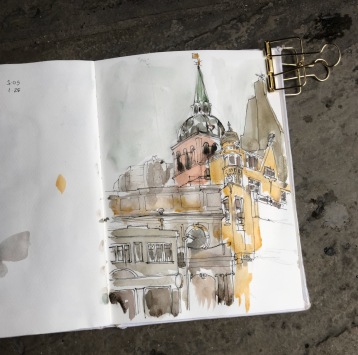 Finished drawing, on the pavement.

2 thoughts on “St Peter upon Cornhill”

Norwich Cathedral from the Cathedral Close.
Sketching in Norwich - "A Fine City".
The Horse & Groom pub on Curtain Road, London EC2.
Bank of England, Tivoli Corner, sketched from Moorgate.
Buildings of Spitalfields Market, London E1, with the office blocks of Bishopsgate behind, and the residential tower Principal Tower to the right.
The Artillery Arms, Bunhill Row, EC1