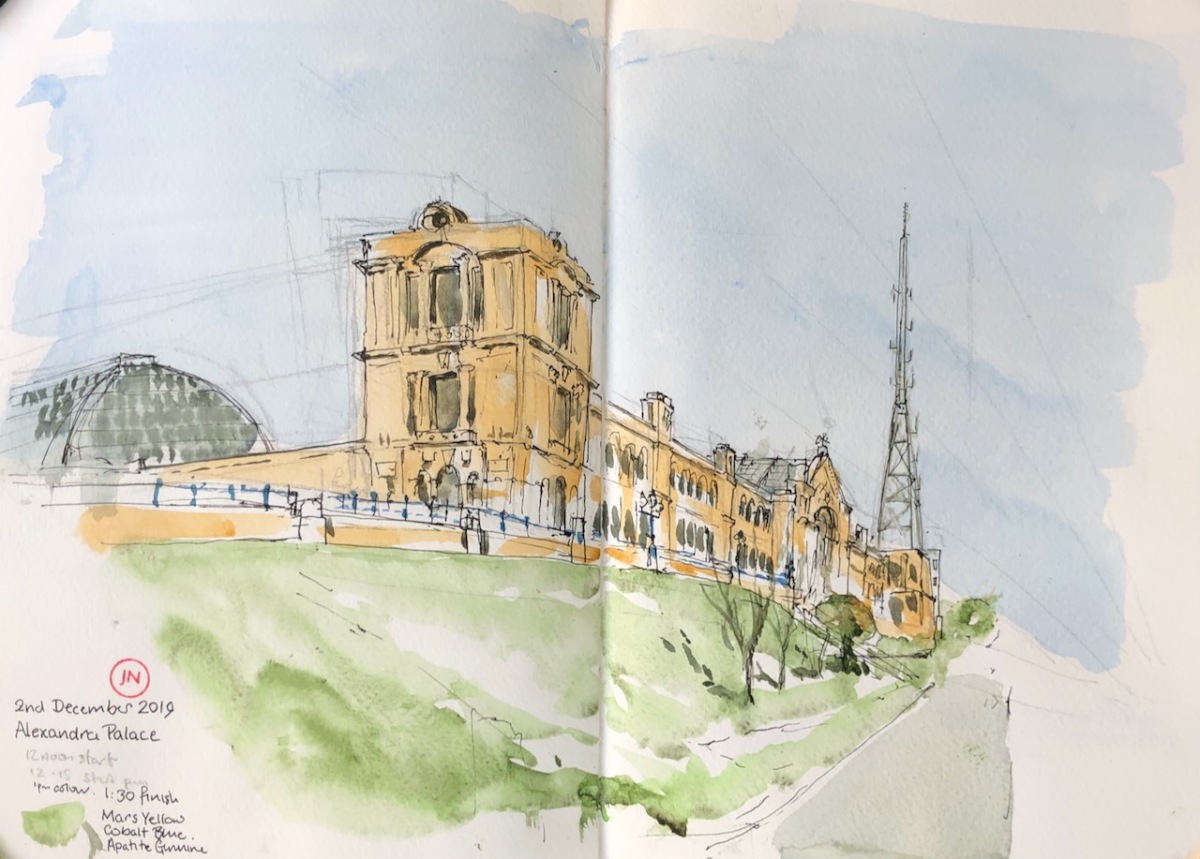 There was sun. It’s a low, Northern Hemisphere, sun. I know that in the City amongst the high-rise buildings, I will not see the sun at ground level. So the thing to do is to go up. I went to Alexandra Palace, 330ft above sea level. There’s a direct train from Moorgate.

It was sunny, but extremely cold. There was ice on the pond by the fountains. So after this drawing I walked down the road I’d just painted, in search of warmth and coffee.

The café called “The Phoenix” was closed 2nd to 5th Dec. The café of the Skating Rink was closed because the skating rink was closed. So at the far end, beyond the aerial, I turned left around the building and found the Theatre. Against all expectation, the doors were open. Indoors was a vast, warm, space.  I walked around on the huge floor and found a coffee van which looked like the ones you see at funfairs, or airports. It was empty. The whole place was empty, and weirdly quiet. At a wooden table a knot of teenagers were working silently on what looked like, and may well have been, homework, assisted by laptops, phones and fizzy drinks.

I found someone at a desk. They found someone associated with the van. She rushed up, cheerful and apologetic. She was apologetic that she had kept me waiting. The second apology was that the coffee machine “was not working”. Oh well, tea is nice too.

Back outdoors and further round, the sun lit up the glass domes.

I walked round as far as I could. The place is simply enormous, and all built of bricks. This is the place if you are planning your pop concert. Pink Floyd were here (1967). My neighbour remembers the first Campaign for Real Ale event here (1976)*. He still has the half-pint mug he was given.

Here are the locations where I did the drawings: 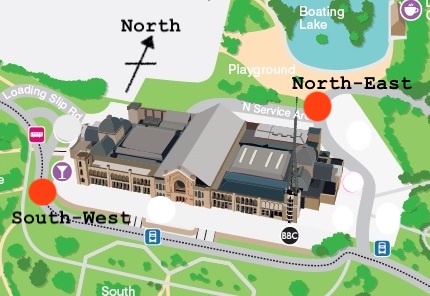 Here are some photos of work in progress: 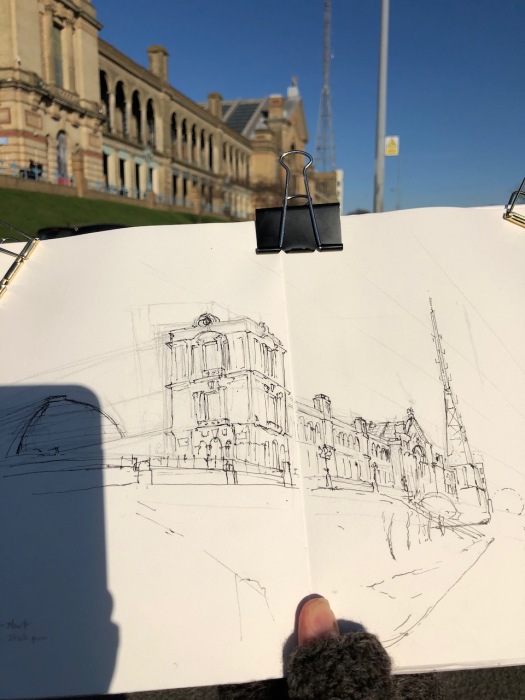 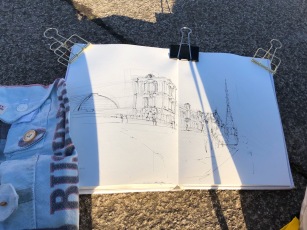 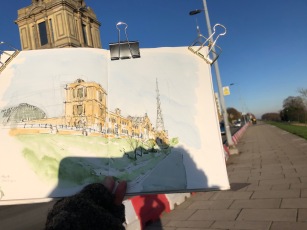 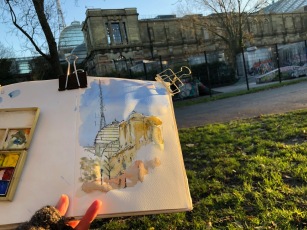 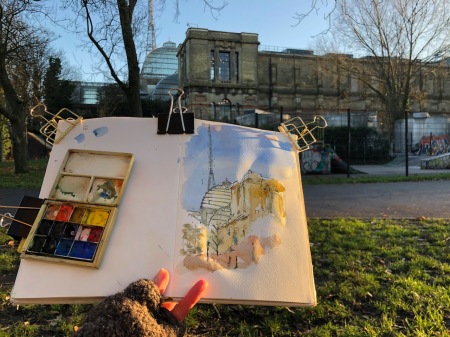 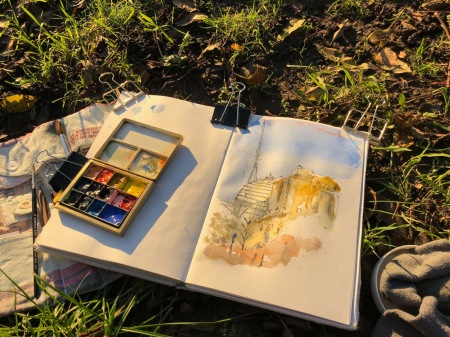 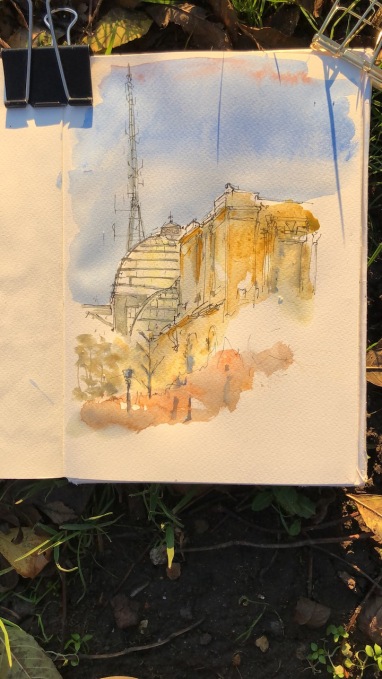 The original building was destroyed by fire shortly after it was built, and then, amazingly, rebuilt.  Here is a photo of a photo that was displayed in the Theatre. It shows the original building, around 1900.  The tower that is prominent in my first sketch originally had a squat spire. This photo is from roughly the North East, as my second sketch. The entrance to the Theatre is on the left, and you can see the glass dome.

You can also see a train, going along the back wall of the Palace, on the lower right hand side of the picture. Evidently there was a train service right up to the door. On my walk around, I saw the former station house, now a community centre. 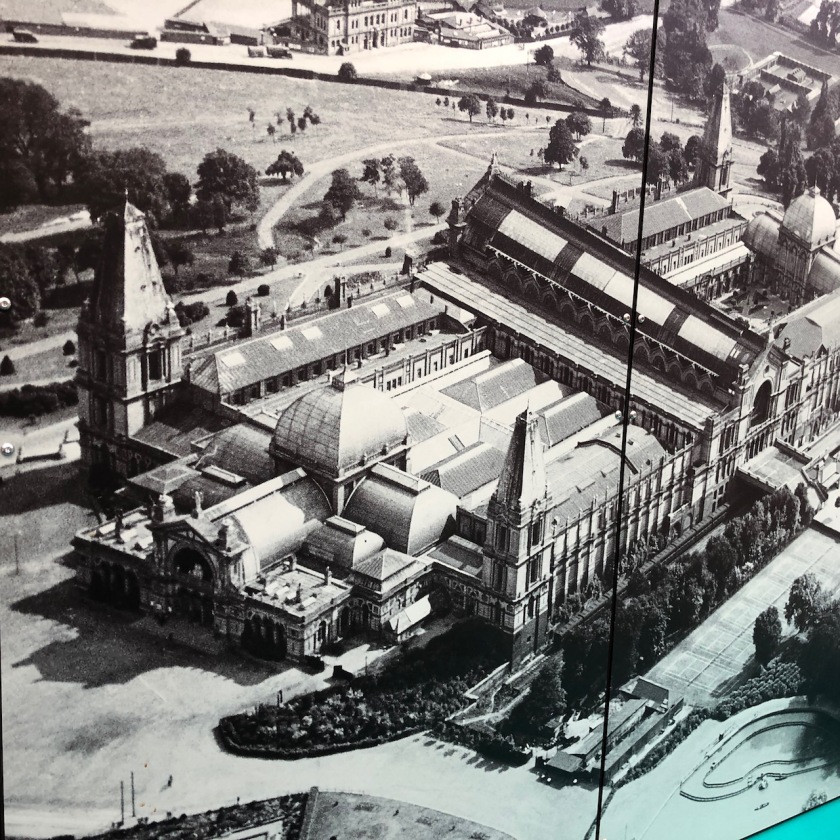 Here is a map of Alexandra Palace and Park now. The station is now at the bottom of the hill.

One thought on “Alexandra Palace”