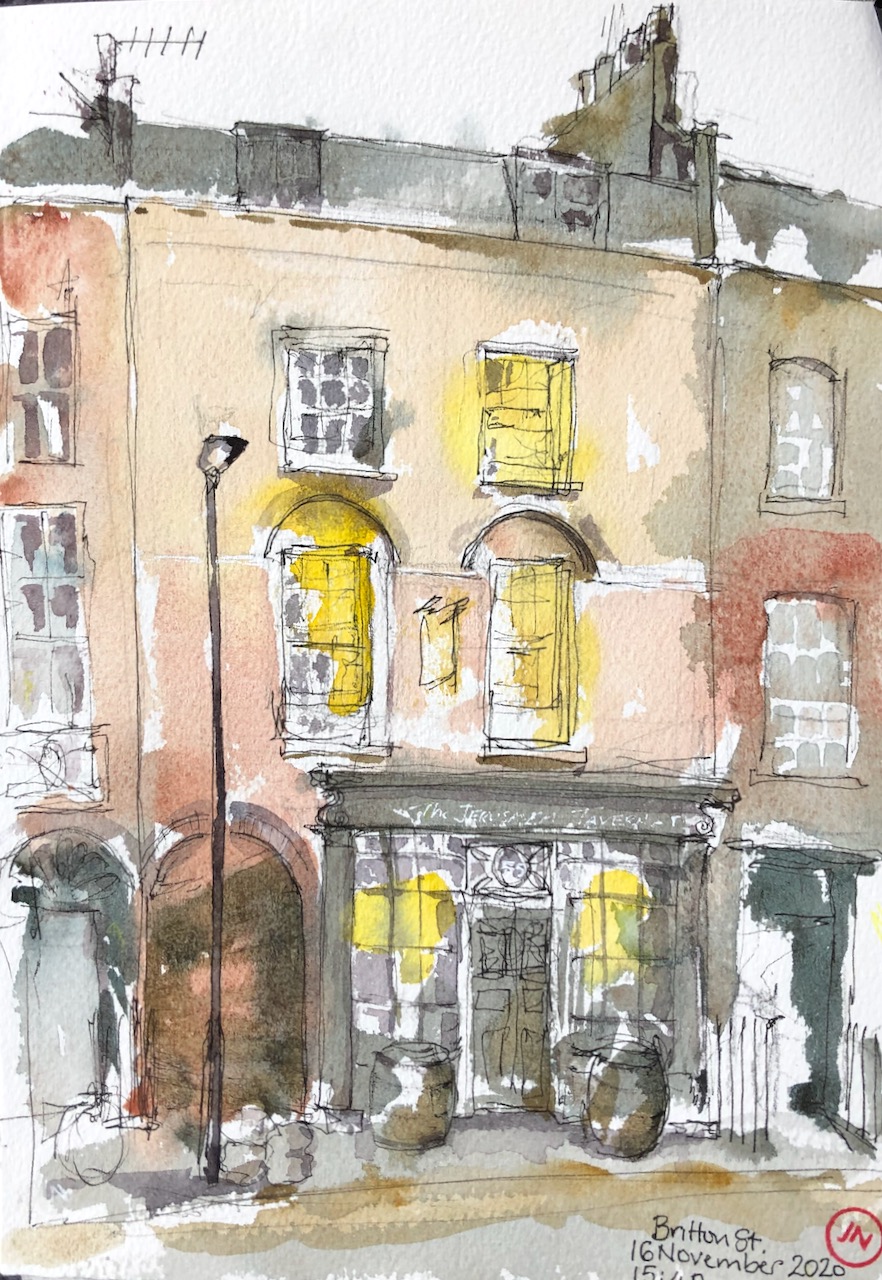 Here is a sketch of The Jerusalem Tavern, Britton St, Clerkenwell, made as the light faded.

I find this a particularly lovely building. The curves over the windows are semicircles and there is a pleasing symmetry to the upper floors. The semicircle over St John’s Passage exactly matches the door to its left, on another lovely house which has amazing tall windows on the first floor.

Britton Street was surprisingly lively on that Monday afternoon. There are offices along the street and people rushed in and out of doors, or came and stood on the pavement smoking. Delivery drivers were the main traffic, both vans and bicycles. They all seemed to know each other. A package was delivered to the office next to me. A woman came out to receive it. It was evidently expected. The driver returned to his van, and sorted more packages inside.

Here are some work in progress pictures and a map. I have just finished reading “Troubled Blood” by Robert Galbraith. If you’ve read the book you’ll know that much of the action takes place in these streets in Clerkenwell. As far as I can work out, all the streets mentioned in the book exist, and the routes described are realistic.

This drawing took about an hour. The colours are: for the walls – Fired Gold Ochre (DS), Mars Yellow (DS) and Phthalo Turquoise (W&N) , for the light in the windows Hansa Yellow Mid (DS). The drawing is 7″ x 10″, done in a sketchbook on 300gsm Arches Aquarelle Paper.

While I was drawing, I detected a movement in my peripheral vision. A spider of alarming size was climbing the wall against which I was leaning. It was making little spurts across each brick, then secreting itself into the mortar, trying to become invisible, before making its next jump. As I watched, it turned around meaningfully, and started heading down towards my rucksack, which was upright on the pavement, open, leaning against the brickwork like a spider-catching bucket. I moved the rucksack, and closed its flap. I was more-than-usually disconcerted, because we had been watching “Dr No” the previous night. I could recall rather too vividly that scene of the poisonous spider which crawls on James Bond while he is sleeping. I stood away from the wall, and monitored the spider’s progress. I did not have long to wait. It reached pavement level, no doubt disappointed that the bright yellow rucksack had somehow disappeared. Then it went into a pavement-level crack to decide what to do next. I decided to stop worrying about it.

To see the spider, scroll down – if you dare. Trigger warning: SPIDER.