In a previous post I presented a drawing of 65 Basinghall Street done from the bridge which is on the North side of the building. Here is the south side.

65 Basinghall Street is the building in front, with the scalloped arches. Behind it is City Place House.

City Place House was built in 1992, and is due for demolition and replacement by a building which is taller and broader.

65 Basinghall Street is listed Grade II. The Historic England website gives the reason for the listing:

No 65 and 65a Basinghall Street, 1966-69, by Richard Gilbert Scott, is listed at Grade II for the following principal reasons:

The “celebrated architectural dynasty” is the Gilbert Scotts, 4 generations of architects down the male line.

Richard Gilbert-Scott was the fourth in line. He also designed the Guildhall Art Gallery and Guildhall Library.

65 Basinghall Street was originally an exhibition hall and offices with two temporary magistrates’ courts (with cells) and a records store over basement car parking.

The Historic England website also notes the alterations made to the site in recent years:

The principal alterations to the building’s interior since its construction are the conversion of 65a Basinghall Street (the former exhibition hall) into office space, and the opening-up of the magistrates’ courts (part of 65 Basinghall Street) also to form office space. The hard landscaping has also been altered, the raised terrace to the south has been repaved, losing the original pattern of hexagonal paving and glass lenses, and the flight of steps leading up to the exhibition hall has been reconfigured to create a light well and lifts from the terrace down into the office space below. A scheme of retaining walls and plant boxes which were part of this landscaping has also been lost.

Here is a photo from the Historic England website, and a photo I took yesterday for comparison. I could not stand in exactly the same place as the photographer of 1974, because the walkway has changed. This is the view from the North.

There are many more differences on the South side. I can’t find a picture pre-2002, which was when a major refurbishment started on the Guildhall North wing. As part of this refurbishment, changes were made to the plaza and walkway. If you have a old photo – I’d be very interested to see it.

I made the drawing on a brilliant sunny day, 23rd April 2021, sitting on a bench on the plaza. 65A is currently in use as a non-symptomatic Covid testing centre. It didn’t seem to have many customers. I counted two in the time I was there, about 1½ hours. But I might have missed some.

Here are photos of work in progress.

Here are other drawings I’ve done in the area, click the title to read more.

65 Basinghall St EC2 from the bridge

I found a photo on Flickr by Peter Marshall, taken in 1986. Click the picture to go to Peter Marshall’s Flickr album and see a more detailed picture. 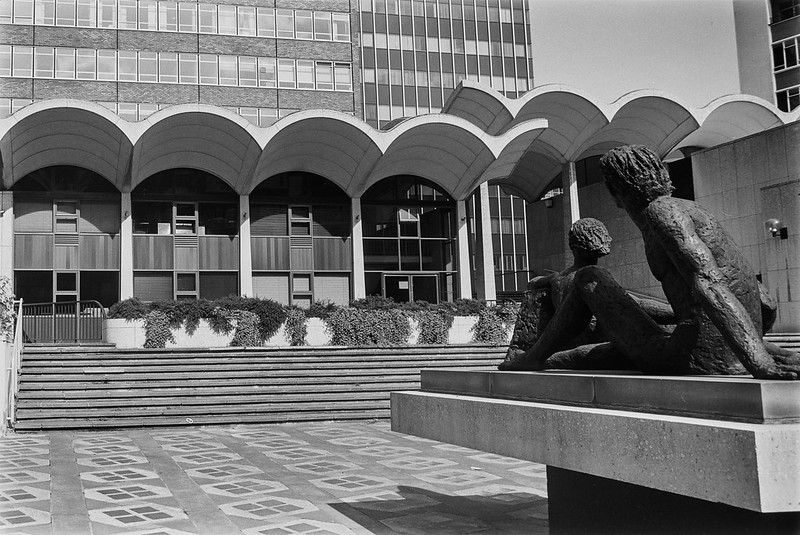 “The Cottage”, 3 Hayne Street EC1.
Another sketch of @christchurchse1 , this time from the North. Sketched from a well positioned but freezing cold bench amongst the trees.
South side of Christchurch Blackfriars Bridge, sketched from Colombo Street.
House in South-west London, pen and wash.
Happy New Year!
St Andrews by the Wardrobe, Queen Victoria Street, London EC4. Sketched from Baynard House.