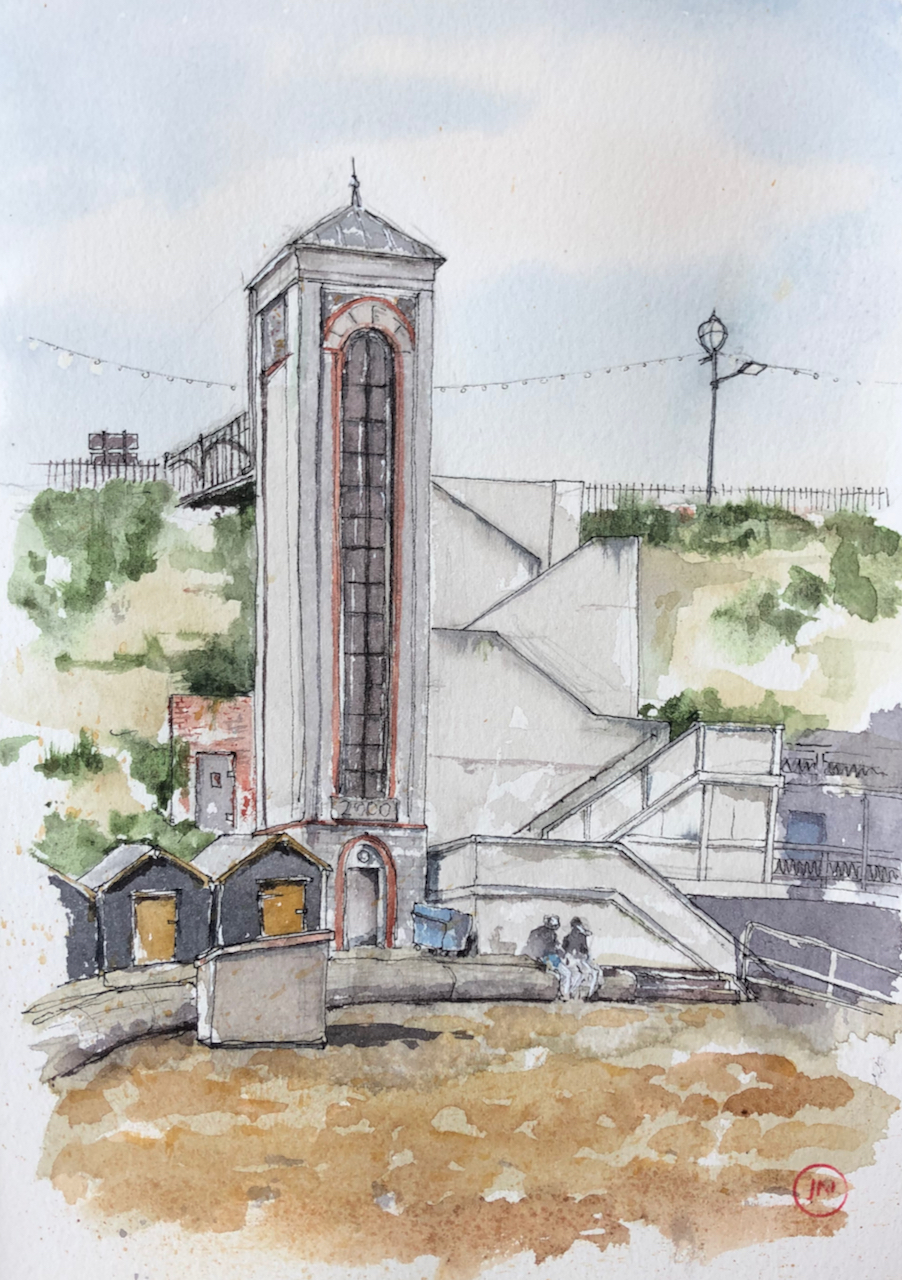 Broadstairs is at the far end of Kent.

It is a Victorian seaside resort, with a sandy beach, and parks and a bandstand. The beach is below chalk cliffs, and those earnest Victorians provided their citizens with a fine lift to bring people between the sandy beach and the cliff top attractions. I was delighted, and surprised, to find this lift in full working order. While I made the drawing, the lift was used by a continuous stream of people.

The whole time I was drawing, music floated down from above, a series of 1950s and 1960s classics, including Elvis’ rendering of “You were always on my mind”. This seemed somehow very poignant as I sat there in the sun on the sand.

When I finished the drawing, I used those sculptural stairs on the right of the lift to climb up to the top. A young family were waiting at the bottom. One of their number, a lad of about 8, came rolling along the boardwalk in his bright green wheelchair. He expertly negotiated the narrow door to the lift and shot inside. I reached the top as they all emerged, and the lad zoomed off along the smooth tarmac into the labyrinth of parks and bandstands at the higher level.

The citizens of Broadstairs have fought hard to keep their lift open. The lift was declared “permanently closed” earlier this year (2021), and only re-opened after a sustained campaign by local people, notably “Access Thanet” (pictured)

It reopened in July 2021, according to an article in the “Isle of Thanet News”

I walked from Margate Railway station to Botany Bay. Out on a headland, I encountered this extraordinary building. Later, I went back to draw it.

You can see – I hope – that my viewpoint was low. I was sitting on the ground by the side of the road. The road is frequented by dog-walkers. I learned something from this low viewpoint: civilised dogs are not used to people sitting on the ground. Many of the dogs were loose, and came rushing up to me, barking in admonition, or alarm, or delight. The owner hurried after, calling in vain after their hound. The dog sat next to me, barking in alarm, or pride, depending on the breed. Either “Danger! Danger! There’s someone sitting on the ground!!” or, if an ancestral hunting dog, “Look, revered owner, what I have cleverly found here on the ground. You must have shot it. It’s my job, I think, to bring it to you?” The owners argued in vain against these inbuilt instincts, and eventually had to drag the dog away from its enemy, or its prey, depending on outlook and breeding.

I went on drawing. A man came by, without a dog. He looked at me, and looked at the building, and looked at my picture. Then he gave a kind of shrug which said “OK, right, I get it, you are drawing the sewage station.”

I replied to this implied comment by saying that it was an interesting building, or rather, I found it interesting. His response was, “1960s Soviet Brutalism without the politics” and I said yes, that put it well.

He said, without breaking his step, “I am good with words”. He said it as a matter of established fact, not a brag, not a hope, nothing sheepish or apologetic, just a description. I silently wondered if I should have recognised him: was this a well-known playwright, a poet, a newspaper columnist? He stopped for a moment. “But just with words,” he continued, with a gesture towards my painting equipment, “Not with a paintbrush.” He paused, to make sure I’d heard. Once his words had reached me across the still air of the road between us, he declared, “I’ll leave you to it!” and he strode off, leaving me puzzling. I think I’d just heard a compliment, but I wasn’t quite sure.

When I walked along this road in the daytime, I saw that there were a large number (about 8) of contractors’ vans and lorries parked outside the pumping station. The blue/grey rectangle in front of the pumping station is some kind of portakabin or works area.

I found out later that this pumping station had failed during the summer (2021), and let sewage into the sea, rendering local beaches useable. Southern Water issued an apology which said, amongst other things:

“Wastewater releases at times of heavy rainfall happen across the UK to protect properties from flooding. The release that happened overnight on 16 June was caused by a combination of heavy rainfall and lightning strike during the storms which caused a short power failure and affected systems on site at our Margate Water Pumping Station. Back-up generators are in place. As part of our preparations for the predicted thunderstorms and heavy rainfall we also had a team standing by in the area. These additional precautionary measures meant we were able to immediately begin work restoring the site to full operation. Unfortunately, we had to make this emergency release to protect local homes and businesses from internal flooding.”

A big notice on the pumping station said: “Margate and Broadstairs Resilience Phase 2, upgrade and improvements”. It seems as though improvements are much needed. I can start to understand how local people might have been a bit surprised that I was drawing this pumping station, cause of a recent local disaster.