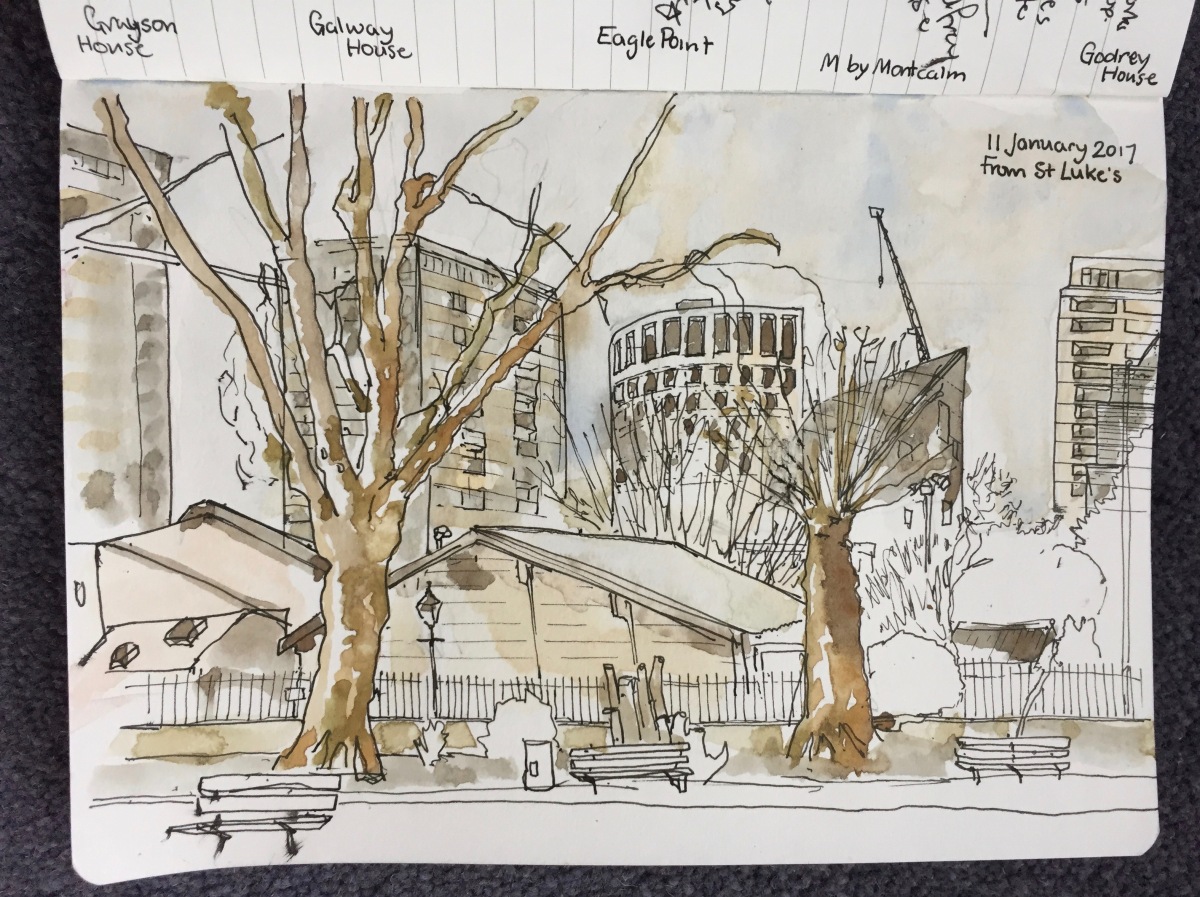 A vista of Islington development, drawn from a bench in St Luke’s Gardens.
In the foreground the building with the pitched roof is Toffee Park Adventure playground.

In the background, from left to right:
Grayson House (Left edge of picture) and Galway House, both part of the Pleydell Estate, Islington Council, completed 1959 (according to “Wikimapia” – I don’t know how reliable that is)
Social housing and ex-council flats.

“Squire and Partners’ concept for the M by Montcalm hotel in Shoreditch was delivered in collaboration with Executive Architects 5 Plus, and completed in summer 2015. The site – opposite Moorfields Eye Hospital on City Road – provided inspiration for a striking facade which expresses the idea of the optical and the visual.

Responding to the Moorfields Eye Hospital opposite, and taking inspiration from the 1980′s artworks of Bridget Riley, the facade is expressed as a triple glazed skin enlivened with differing patterns of transparency, opacity and solidity to convey diagonal slopes breaking across an underlying vertical structure.

Manipulation and modulation of light, both internally and externally, give the facade richness and an ever-changing face on this prominent site, as well as assisting solar performance to create a sustainable development. The conjunction of the vertical and the diagonal create a visual effect of depth and movement, and express the activities taking place within the building. At the upper levels the facade openings become larger to express the more social uses and exploit the panoramic views.

At ground and lower ground floors, the building skin ‘lifts’ on the diagonal to reveal the hotel lobby, public bar and restaurant, all clearly visible from the street.”

Drawn and coloured on a bench in the garden, about 1hr10min.
On another bench, two men cracked open cans. I heard them call “What’s that dog, mate?”
The shouted response came, “Her mother’s a rottweiler and her father’s a Labrador”. The owner, limping across the park, informed them that the dog was “one step away from a wolf”. This was evidently recommendation. “She’s got rottweiler markings” he said.
Once he’d gone, the interest in dogs continued. They called to a woman, and asked about her dogs. These were “A Labrador and a cocker spaniel”. The Labrador was called Debbie. They called to her, and the dog rushed over, bouncing up at them.

While all this was going on, a woman with oriental features, without a dog, was walking loops of the park, looking directly ahead.

After the drawing I walked to identify the towers, via Radnor Street and Peerless Street, and had a coffee at Westland Coffee next to Eagle Point. This coffee, in a paper cup, cost £2.70. They did bring it to my table though.

Here what the picture looked like before the colour went on: