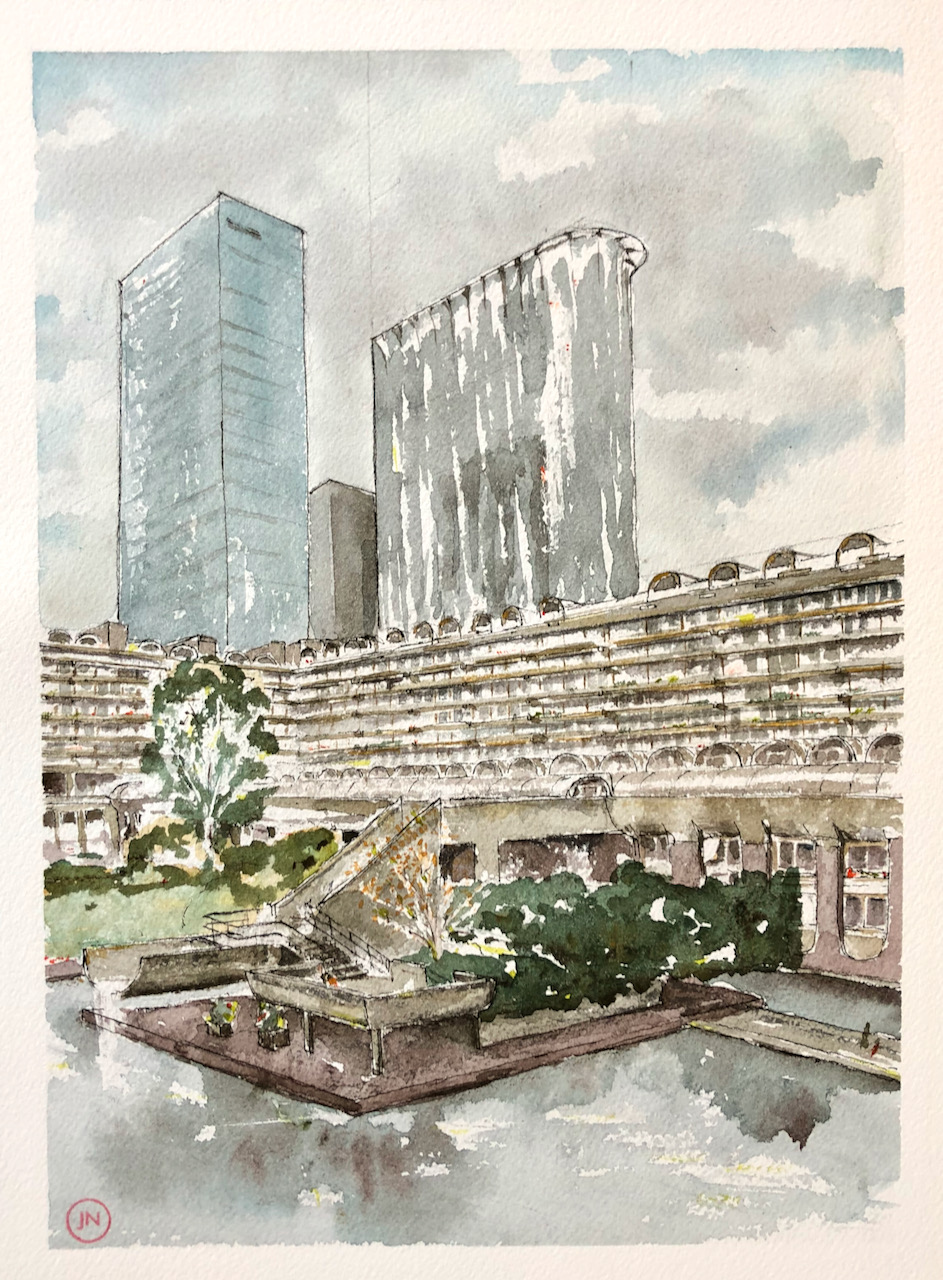 A client asked for two pictures. The first was of CityPoint. Here is the second, Willoughby House.

This is a view from the public highwalk under Andrewes House. You see the waterfall into the Barbican Lake, and Speed Garden in the background. That marvellous tree is a feature of Speed Garden. It has white bark.

Willoughby House is a terrace block in the Barbican. The multi-storey flats inside have interesting intersecting shapes, and long views across the water. It was completed in 1971.

Here is work in progress on the drawing.

On the skyline the two towers are the Heron residential tower on the left and CityPoint on the right. City Point predates Willoughby House – it was completed in 1967, although it looked different then. The curved top is a 2000 addition. In the middle is Ropemaker Place. The Heron residential tower replaced the original Chamberlain, Powell and Bon utility building on the same site. This was a brutalist concrete building, matching the Barbican, which housed a Fire Station, registry office, coroners court and mortuary. Milton Court was integral to the Barbican, linked aesthetically and by highwalks. It was destroyed in 2008.

The Heron residential tower which replaced Milton Court was finished in 2013. It is 36 stories and 122 metres high. Its lower floors house the Guildhall School of Music and drama. The upper stories are luxury flats.

CityPoint (1967, refurbished 2000) is office space, with bars and coffee shops at ground level. It is 35 stories and 127 metres high. Ropemaker Place (2009) is 23 stores of office space. It looks smaller because it is further away. It has no bars, no coffee shops, just a straight cliff down to the street.

While I was drawing, a fashion shoot arrived. It was a jangling cavalcade of clothes rails, photographic equipment, and a music system on wheels. They set up camp a little way away and starting photographing the scenery, which included me. They turned their attention to the model who placed herself carefully against the concrete wall. Then they upped and went on towards Gilbert Bridge, their music and conversation fading into the perspective lines.

Here is the ink stage. You can compare with the colour by moving the slider.

The colours here are mostly Mars Yellow, Phthalo Blue Turquoise, and Perylene Maroon. The red dots are Transparent Pyrrol Orange. There’s a bit of Green Gold in there too. I started this on location and finished it at home.