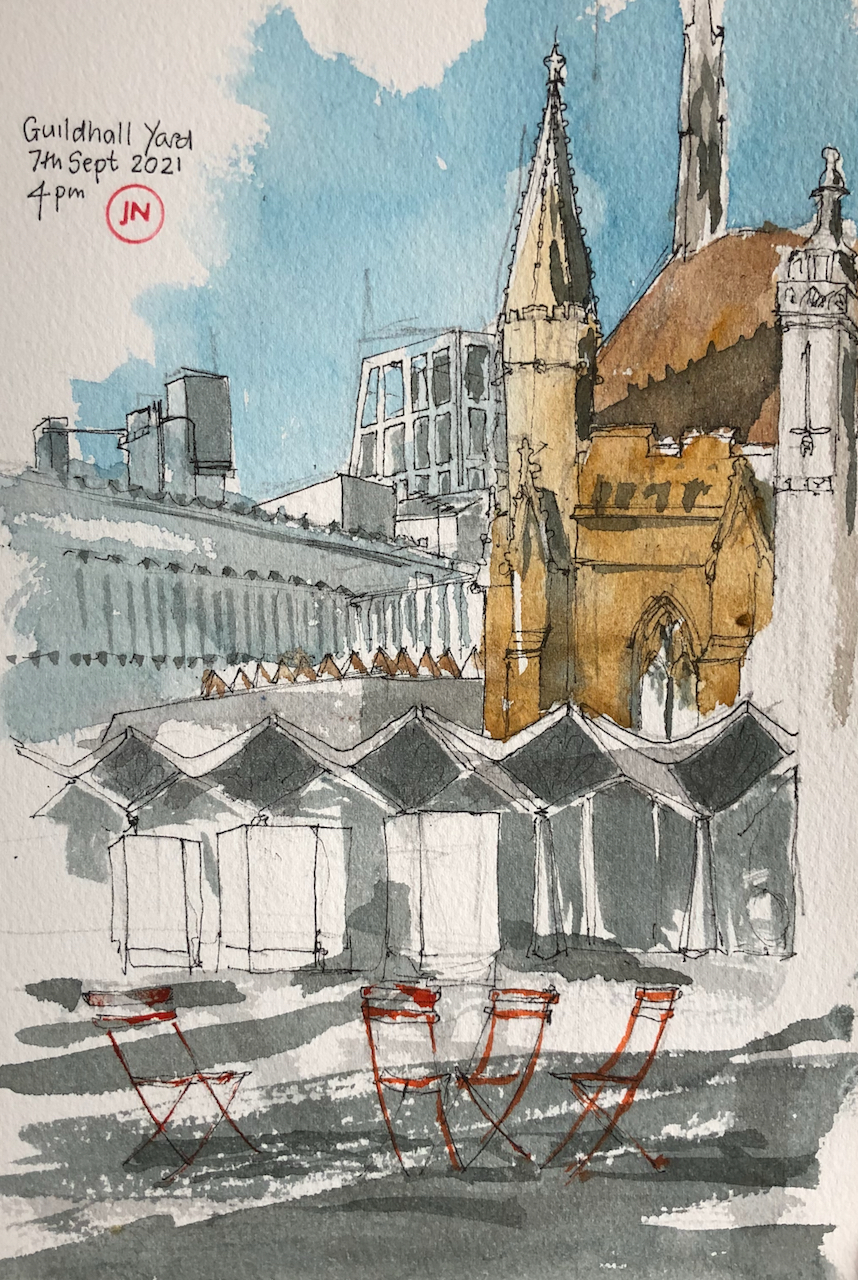 Here is the North West corner of the Guildhall Yard. The modern part is designed by Richard Gilbert Scott (note 1). What we are looking at, in pale concrete, is the Guildhall Library, and offices of the City of London Corporation. Behind it, you see the tops of the buildings on Wood Street.

In the foreground you see the chairs, generously provided in the Guildhall Yard by the City of London, for public use. I commandeered a chair and a table and set myself up in a nice shady position next to the South East wall of the yard, between two gigantic plant pots.

While I was drawing, someone took up residence the other side of the gigantic plant pot, and started a long and fascinating conversation on their phone. They were a recruitment agent, and embarked on a forceful sales pitch to a potential recruit. They were recruiting on behalf of a large bank in the City. They described the proposed future restructuring of said bank, and the nature of the forthcoming vacancy that was to be filled. They named the bank, which I will not do here. They aired details of the potential salary and work locations. After completing this gripping conversation, they immediately called a work colleague and gave an alarmingly candid opinion on the potential recruit they’d just been talking to. If you are thinking of having a conversation of this nature, the Guildhall Yard is perhaps not the most discrete place to choose!

At 3:45pm precisely, workers arrived and removed the chairs. I completed my drawing sitting on the flagstones.

This drawing took about 1½ hours, sketched and coloured on location. The main colours are Mars Yellow, Phthalo Blue Turquoise, and Transparent Brown Oxide, with some Perylene Maroon to make the greys. The chairs are Transparent Pyrrol Orange.

The screens, shown white in my drawing, advertise a performance of dance entitled “Black Victorians”, which is part of the Greenwich and Docklands International Festival.

Note 1: The obituary of Richard Gilbert Scott refers to his work on the Guildhall Art Gallery and the Guildhall West Wing. It is here: https://www.theguardian.com/artanddesign/2017/jul/12/richard-gilbert-scott-obituary

Note 2: The original Guildhall building has a long history, and has been rebuilt and enhanced several times, most recently after bomb damage in the 1939-45 conflict. Its original completion date of 1411 is quoted in this article from 1848: https://www.british-history.ac.uk/old-new-london/vol1/pp383-396

I’ve sketched around the Guildhall often. Also I’ve sketched 65 Basinghall Street, which is another design by Richard Giles Scott.

From the site of the former St Mary Aldermanbury, I looked across towards the Guildhall, the offices of the City of London. It is dark and green in the former Nave of the church, whose pillars you can see on the right.…

At the junction of Love Lane and Aldermanbury in the City of London, there is a small park. If you are in the area, it’s well worth a visit. The parklet is on the site of St Mary Aldermanbury. A large marble…

The winter evening settles down With smell of steaks in passageways. Six o’clock. The burnt-out ends of smoky days. And now a gusty shower wraps The grimy scraps Of withered leaves about your feet And newspapers from vacant lots; The showers beat…

65 Basinghall St EC2 from the plaza

65 Basinghall St EC2 from the bridge