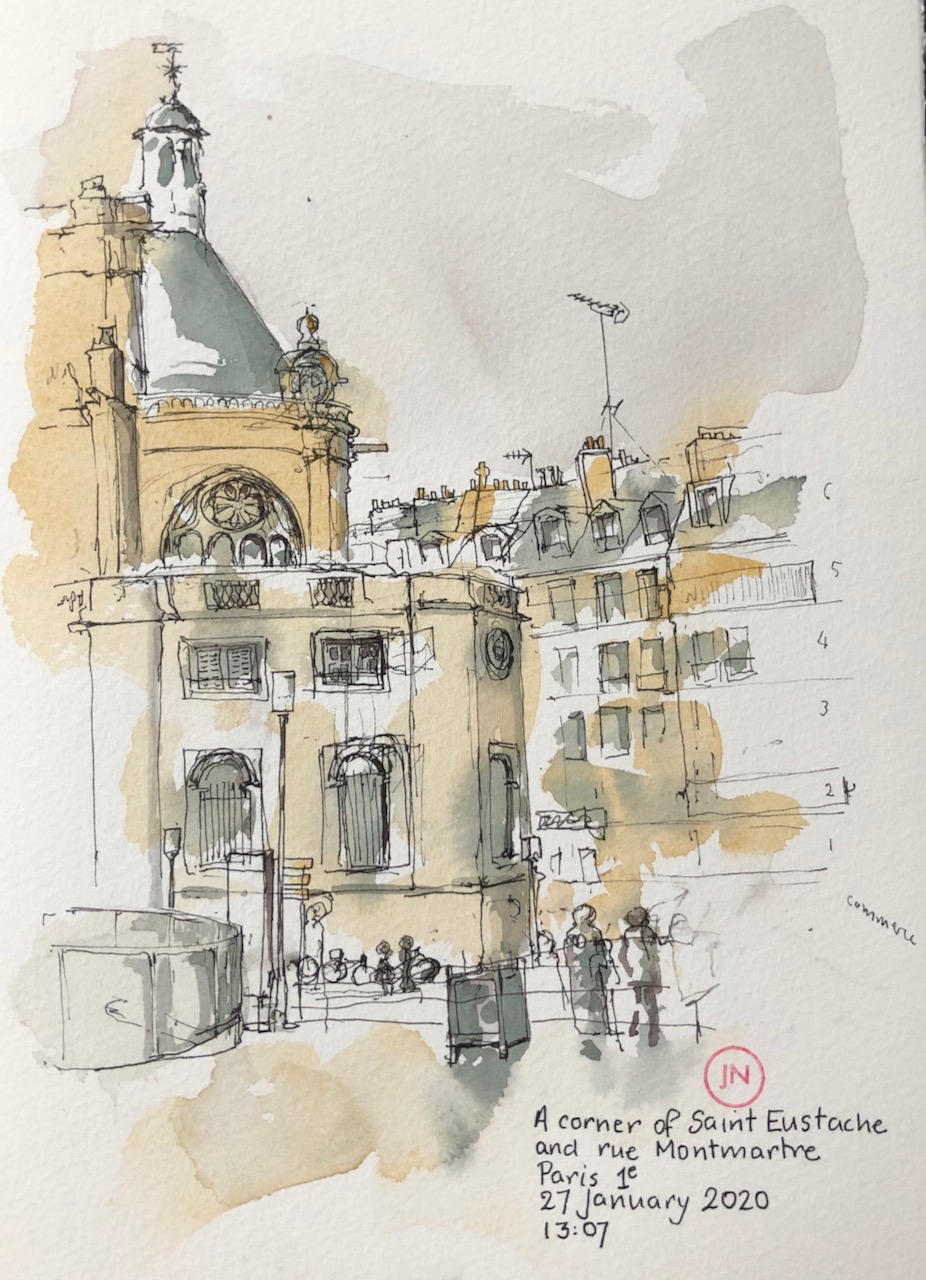 Here is a corner of St Eustache, near Les Halles in central Paris.

St Eustache was built between 1532 and 1632. I drew it standing in the pedestrian area near Les Halles, as people flowed by. I enjoyed the fact that there were huge chimneys on the church, shown high up on the left edge of the picture.

The sky was overcast. It was a Monday. A group of lively young people were hanging about, calling to each other.

This pedestrian area was one of those liminal zones: between public and private, not quite a pavement, not quite a plaza, partly a thoroughfare, partly a resting zone. As a result, the social rules were ambiguous. People were hanging around, people were passing through. Evidently there have been incidents. A large poster said: “City of Paris, Meeting Point, Public Calm. The operatives of the City of Paris in charge of Public Calm welcome your feedback and comments between 6pm and 6:30pm, Monday to Friday. To report an incident (“incivilité”) call 3975 or go to Paris.fr/incivilité”.

I was intrigued by the idea of City operatives charged with “public calm” (“tranquillité publique”), and wonder how and whether it works.

Here’s another sketch in the same area. This the “Bourse de Commerce”, the Commodities Exchange. It’s now the former Commodities Exchange, with massive building work going on to convert it into a contemporary art space. The architect for the conversion is Tadao Ando.

This was a sketch as I was waiting for the swimming pool to open.

I did some people-sketching in a café and in waiting areas on the trip. I am on a mission to get more people into my drawings, so I practice.

I walked across to the Left Bank, searching for “Maison Charbonnel”, the home of the maker of the etching ink that I favour. The place was there, on the Quai Montebello, just across the river from Notre Dame. However, because of the Métro strikes, or because of the weather or for some other reason or no reason atall, the shop was closed “until the 3rd of February”.

I drew a picture of Notre Dame.

This took about one hour 35 minutes. The temperature was 7 degrees C.

Then I took sanctuary in a marvellous art shop I found: “Magasin Sennelier”, 3 Quai Voltaire. I was served by a gentleman who might have been there since the 1950s. He was pleased to tell me he knew L. Cornelissen & Son of London, and Green and Stone, and he knew Mr Rowney, of Daler Rowney paints, personally. Or had done. Sennelier paints were superior, I was authoritatively, if not entirely objectively, informed.

In the South I made a pen sketch of a vast canyon:

And here’s a quick sketch in the library, before dinner:

City Towers #cityoflondon from Seething Lane Garden EC3.
All Hallows by the Tower.
From the site of the former St Mary Aldermanbury, I looked across towards the North Wing of the Guildhall, the offices of the City of London.
At the junction of Love Lane and Aldermanbury in the City of London, there is a small park. If you are in the area, it’s well worth a visit.
From Stanley Cohen House, Golden Lane Estate. #cityoflondon
#clocktower @callyclocktower in Caledonian Park.