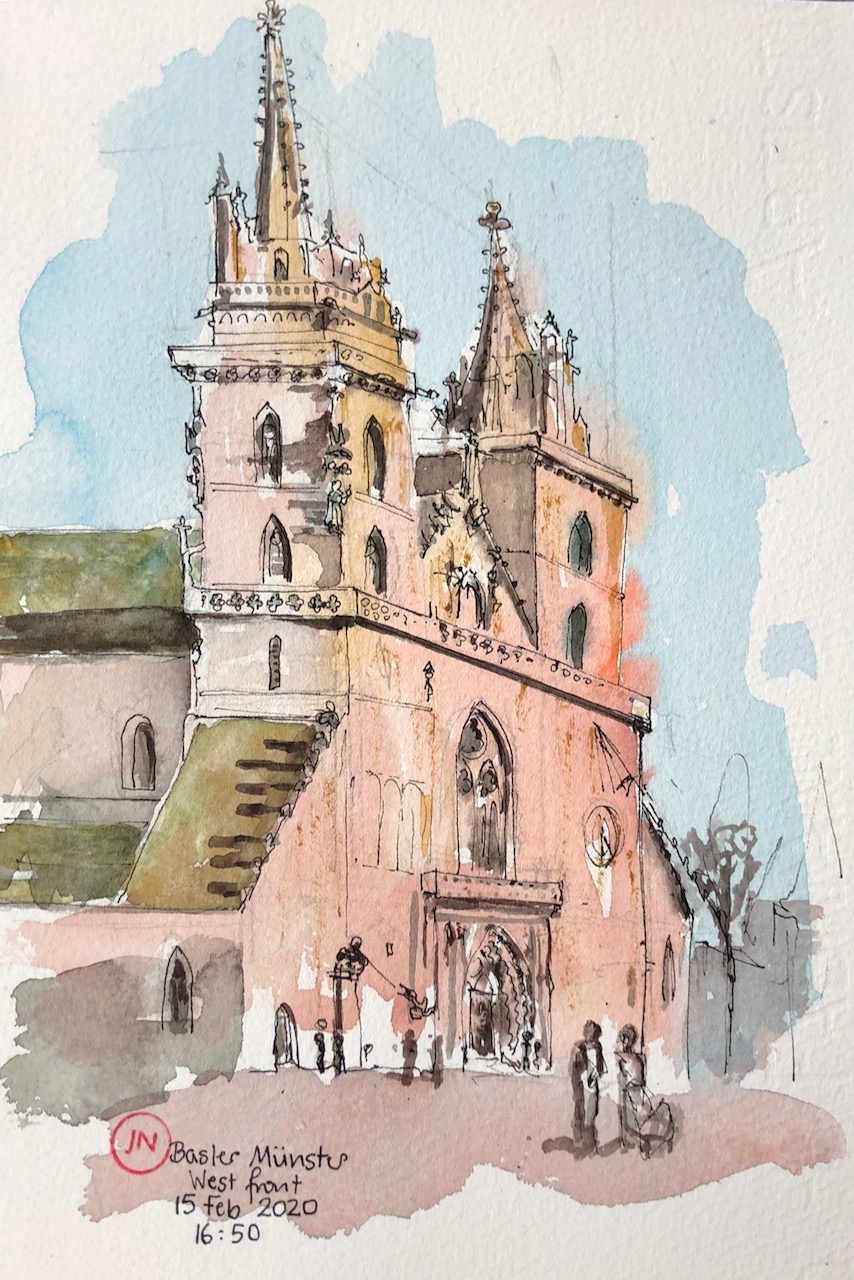 In the streets of Basel, you can hear your own footsteps.

In the hour and half that it took me to draw this picture, people made use of the fountain. Someone came out of one of the adjacent houses and filled a watering can. A woman helped a child to stand on the white marble edge and then to walk cautiously on the iron bars across the water. The child dipped her hands in the flowing water and drank. She played with the water that came from the spouts. Then the woman and the child returned to their bicycles, and continued their ascent of the hill. Elderly people, climbing the hill, paused here to rest. A runner lent over the water and sluiced his face, before pacing on up the slope towards me.

This part of town is very old. Basel has the fine custom of telling you a little about each street, on the street sign. The one for Gemsberg says:

So this street was named after a house which stood here in 1661. [German speakers reading this: please correct me if I got that wrong!]

The house on the right has an inscription in magnificent script. My German-speaking consultant enables me to state with some confidence that this reads as “In 1563 [this house was created] by joining together two houses: “To the Fridberg” and “To the Slifstein”, both mentioned in 1300-1322″

“Fridberg” might mean “Tranquil mountain” and “Slifstein” might mean polishing stone, or polished stone. Perhaps these were people’s names. I learned at the Basel Paper Mill that in those times smooth stones were used to polish paper, so may be Herr or Frau Slifstein was a paper polisher. But that’s just surmise.

Here’s work in progress on the drawing.

This is a magnificent medieval construction, the present building dates from about 1500. It is a real challenge for the Urban Sketcher. Each edge is decorated. Each corner hosts a saint, or often two. Every planar surface has decoration, low relief, a statue. Not content with simply a sundial, they added also a clock. And on top of all this, the two towers are by no means identical. They each support a forest of spires, some octagonal. The main spire on the right seems to have curving edges, unless that was a cunning optical illusion. Even the roof is decorated with a pleasing coloured diamond pattern in tiles. I did my best, but those medieval stonemasons got the better of me.

To the left of the door is St George and the Dragon, a very realistic statue which I had to put in. St George’s horse prances on firm plinth. St George himself wields a real metal lance, copper or some copper-containing alloy, since it is green. The dragon, some distance away, balancing on a precarious shelf, is clearly endangered by the thrust of the lance. It’s a dynamic and three dimensional scene.

I made more sketches around the city:

On the long journey home, I sketched the people, and my luggage.