St Bartholomew the Less is a Chapel of Ease in St Bartholomew’s Hospital in the City. It’s just to the right of the main entrance from Smithfield.  You might not notice the door in the wall. Sometimes they put a board outside. I’ve been in a number of times. It’s a very peaceful, welcoming, place. Somehow, one feels the need to visit a place of prayer before, or after, a hospital visit.

I was invited to draw pictures of the church. The City Music Foundation, a charity, wants to use my pictures in its publicity. They are going to be based in St Bartholomew the Less. So the Managing Director of the Foundation, Clare Taylor, contacted me. She’d seen the pictures I’d done of The Charterhouse.

Here are the first two pictures of St Bartholomew the Less: 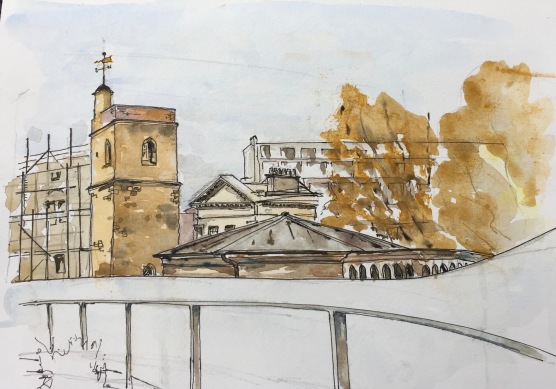 It was founded in 1123, by Rahere, a “courtier of Henry I“, according to the leaflet. The tower dates from the 15th century. “The three bells in the tower include one dating from 1380 and another from 1420” says the leaflet. I was interested in Rahere, because there is a Rahere St and a Rahere House which I have drawn.

Since the Foundation is a music foundation, I thought it would be a fun idea to draw the bells. By kind permission of the Parochial Church Council (PCC), whose representative efficiently produced a key, I was able to go up into the belfry. Bells, I found, are not so easy to draw as you might think. Like the human form, they have curves. And unless you get the curves exactly right, they look like a different character. Also, the belfry contained not only very ancient bells, but also 600 years of dust. It was indescribably dirty. But amazing. And very quiet inside, with all the noise going on outside. I wedged myself into the wooden frame, braced my back against a metal rod, and got started.

The platform into which I was wedged was not very big. I manoeuvred very slowly because I didn’t want to knock anything, such as a paintbrush, down into the depths. The best medium seemed to be black ink. Ink is a bit dodgy to manage at the best of times. But keeping it upright on an ancient wooden raft, in the semi-darkness, verged on the farcical. No-one was there to sympathise, except the bells, and they’d seen it all before.

4 thoughts on “St Bartholomew the Less”

Yesterday I sketched @thewrencoffee which is at @stnickschurch on Queen Victoria Street.
The Captain Kidd, Wapping. Sketched from the Thames foreshore earlier this week.
An experiment. Thanks to @typem2b for the idea to combine sketching and printing.
Vestry House, Laurence Pountney Hill EC4
A view from a shady table at the marvellous @theturksheadwapping #turksheadwapping
The Crown Tavern, Clerkenwell Green @thecrowntavernec1